But that's ok........for ME anyway, Idaho still beats living anywhere ELSE I've ever been.  I'm not real keen on the influx of liberals who have seeped in over the years, as most of us have seen FIRST HAND what they've turned Oregon into.  But here in OUR state, they are only a small noise at the end of a long parade.

As far as I'm concerned, that's just the OTHER "aggravating wind" around here.

The wind IS a problem for shooting targets, though, because it is imperative that initial "sight-in" be done in total calm.  While it's certainly true that you might have to shoot in windy conditions during a deer hunt or on a battlefield somewhere, you'll only have to compensate for whatever the wind is doing THAT DAY............if you targeted your weapon on a CALM day, and locked the sights down.

Because now you KNOW what your rifle/pistol is capable of on its own. 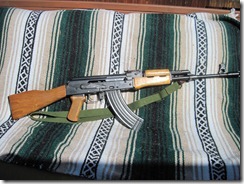 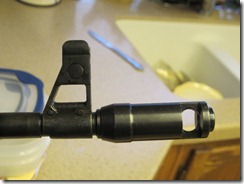 Some of you gun buffs will recall that I added a 2nd AK-47 to the family, but THIS one with a special compensator on it to reduce muzzle climb.  I never shot it because of the weather, so I just sort of "put it away" until the muddy ground hardened up again out where I shoot. 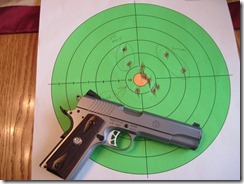 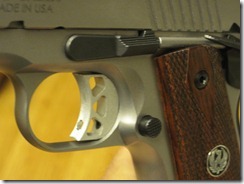 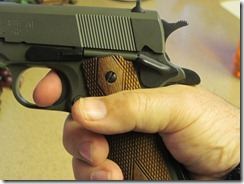 My Springfield 1911 has a trigger set-up identical to the old Colts I'd shot in the Marine Corps, where you got a little more "1st digit pad" of your trigger finger on it, (makes for a more direct straight-back squeeze, and less likely to pull yourself off to the right of target). 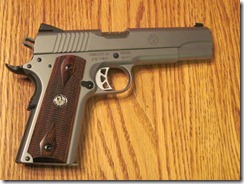 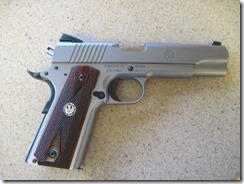 Well..............a friend of mine here in the neighborhood does a lot of his own custom work on HIS guns.  He also knows 1911's inside-out, no matter WHO makes them, and he just happened to HAVE that "Springfield-type" trigger in his parts box. 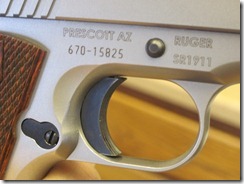 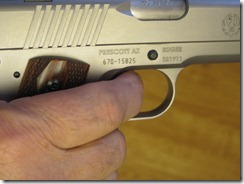 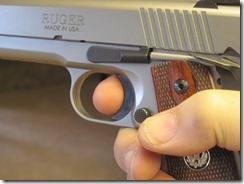 So, over the last few days, I've been waiting for the weather to somehow cooperate, so I could get out there with it.  I also promised my son-in-law Keith ("Kentucky Transplant").........that I'd take him out there as well whenever we got the chance

Well------the pistol was already sighted-in, so wind wouldn't matter, it would just be an "ops-check" on the trigger......but I also knew that this new "AK" needed to be shot and sighted, so I'd hoped to do both guns together.

The weather continued to be crappy (for shooting anyway), but when it DID "back-off" yesterday afternoon........I figured I'd just "go for it", because around HERE, a TYPHOON might come up tomorrow!-------("just wait 10 minutes"). 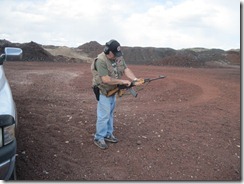 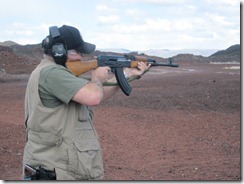 So out we went.  First with the AK-47.  The compensator did what it was designed to do and there was no muzzle climb.  But it wasn't on-target either, pulling drastically to the left.  It was a problem we couldn't cure out there even with sight adjustments, (although I'm pretty sure I FOUND the problem last night when I was cleaning it). 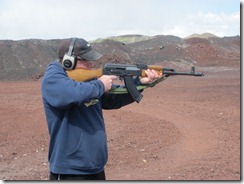 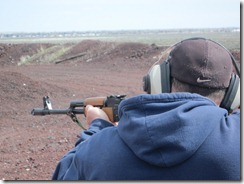 Then I handed the gun to Keith, and he says to himself, "Hey, I know what I'LL DO!...........he just held the sights radically low & right (because it was hitting high & left)........used a little bit of that famous "Kentucky windage", and within a few shots, started busting the water out of those old gallon milk jugs, and was just having himself a grand old time!

Still, there was a problem.  When an AK doesn't shoot straight, there's a problem.    For the meantime though, we'd just shoot up the ammo we'd brought, and turn to the pistol. 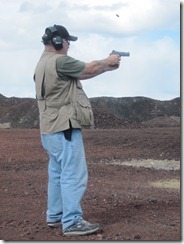 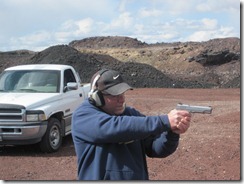 The Ruger of course, shot flawlessly, and I'd already "dialed the sights in" a week or so earlier, so for me, this was just a "different trigger check".    Keith just wanted to shoot!   And he's a really fine shot-----especially for someone who DOESN'T shoot on a regular basis.  I have a feeling that's going to change though!

The more time that passes, the more I like having him in our family!  (being a "right-winger" of course, doesn't have anything to do with that, ya know!).  Actually it doesn't, but I'm glad that he IS.

But there is still that problem with the "AK".  But maybe not the problem I anticipated it to be. 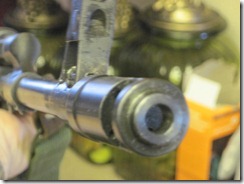 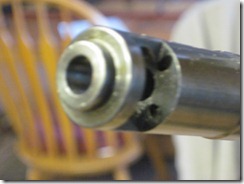 Due to the design of the receiver, you have to clean the barrel from the bullet muzzle-end, and when I was doing that last night, I noticed some bullet marks on the inner wall of the outer muzzle brake ring.

If there is a compensator of ANY type threaded onto a barrel, the bullet must clear it CLEANLY , so that the last thing the bullet physically touches are the lands & grooves of the barrel lining, and nothing BEYOND that!

Those fresh bullet marks are an indication that this compensator  is not exactly symmetrically  true, and if a bullet touches ANY hard surface after the leaves the barrel, it can easily be "re-directed" off of its flight path.

So I think that compensator needs to be removed, mounted in a lathe and be "honed out" a little.   I will talk to Mike up at Buckhorn about that.  I am SURE that's what it is, because the rifle bore is absolutely beautiful in this gun.  Those little wear marks at the end of the compensator tell me that the bullets are TOUCHING that last quarter inch of steel before they hit clean air.  The gun was shooting high & left, and those bullet marks are low & right, and that would be enough to do it.