NAMPA, Idaho (AP) _ A former Idaho Supreme Court justice has delivered a petition to the governor's office with more than 16,000 signatures that urges him to veto a bill that would make it more difficult to put voter initiatives on the ballot.

On Saturday, March 20, 2021, at approximately, 5:30 AM, Idaho State Police investigated a fatality crash on State Highway 78 at milepost 58, just west of Grandview. 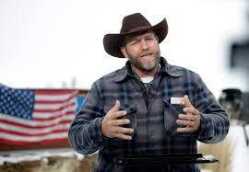 Rescuers save 2 from pickup dangling over deep Idaho gorge 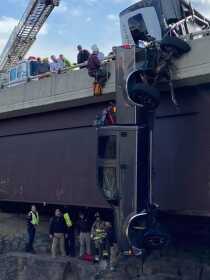 BOISE, Idaho (AP) _ Authorities say a set of camp trailer safety chains and quick, careful work by emergency crews saved two people after their pickup truck plunged off a bridge, leaving them dangling above a deep gorge in southern Idaho.

Idaho State Police responded to the accident at about 2:45 p.m. Monday, said ISP spokeswoman Lynn Hightower. A trooper found a man and a woman inside the pickup truck that was dangling, nose-down, off the side of the bridge spanning the Malad Gorge. The gorge is narrow but is roughly 100 feet (30.48 meters) deep below the bridge, roughly the height of a 10-story building. The gorge reaches about 250 feet (76.20 meters) deep at its deepest point. 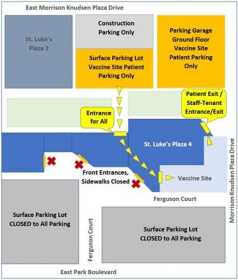 The one-shot Johnson & Johnson vaccine to be provided on Thursdays, depending on supply

BOISE, Idaho (AP) _ Legislation to make it illegal to demonstrate at private residences in Idaho was defeated Tuesday in the state House.

Our new president and the Democrat-led Congress are seeking to bail out big, poorly-managed states and punish states that have operated responsibly during the pandemic ľ a step that would saddle Idaho children with even greater debt and suppress economic prosperity for generations to come.

Mar. 4, 2021 - Washington, D.C.--U.S. Senator Mike Crapo (R-Idaho), a senior member of the Senate Banking Committee, and U.S. Senator Jim Risch (R-Idaho) have co-sponsored S. 563, the Fair Access to Banking Act, which would prevent discrimination by banks and financial service providers against constitutionally-protected industries and law-abiding businesses, such as firearms manufacturers. The bill is led by Senator Kevin Cramer (R-North Dakota) and co-sponsored by 24 Senators.

ôOver the last few years, we have seen a disturbing trend in the financial services industry involving the intentional discrimination of entire industries by the largest banks in the United States,ö Crapo said. ôAs Chairman of the Banking Committee, I repeatedly pressed financial institutions and federal regulators for fair treatment of lawfully-operating companies, and I will continue to provide strong oversight on this issue. Companies and customers complying with federal and state law must have access to credit and services based on their creditworthiness, rather than social or political pressure.ö

BOISE, Idaho (AP) _ A former U.S. Army soldier who was court martialed after he left his post in Afghanistan and was captured by the Taliban is asking a federal judge to overturn his military conviction, saying his trial was unduly influenced when former President Donald Trump repeatedly made disparaging comments about him and called for his execution.

Legislation At A Glance -- District 23

HJR004: This proposed constitutional amendment would prohibit the legalization of controlled substances unless approved by a two-thirds majority vote of the Idaho Legislature. The bill was introduced, read for the first time, printed, and referred to House State Affairs.