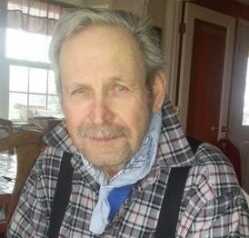 David Brubaker Hamilton, age 90, died on January 14, 2023. Memorial services will take place at the All In Church in Mountain Home, Idaho on Saturday, February 4 at 11 a.m. Interment services will take place at the Idaho State Veterans Cemetery in Boise, Idaho at a date to be determined. Cremation under the care of Rost Funeral Home, McMurtrey Chapel.

David was born April 11, 1932, in Sheridan, OR. His family moved and settled in Indian Cove (Hammett), Idaho in the mid-1940’s. David volunteered for the U.S. Air Force in 1952. He served four years of active duty which included time in both Japan and Korea during the Korean war. David was a heavy-duty diesel mechanic but also worked on many types of aircraft. After discharge from active duty, David stayed with the Air Force Reserves until his honorable discharge as a Staff Sergeant in 1960.

David worked as a police officer in Mountain Home, ID in the late 1960’s and early 1970’s. He eventually retired as a diesel mechanic with the Ada County Highway District in the mid-1980’s.

David was a friendly and lovable husband and father. He especially had a knack with animals. He could be seen working around the mini farm whistling a happy tune with a trail of animals following him around.

David was one of 11 children. David is survived by his wife and childhood sweetheart, Evelyn, children, Eric Flowers (Rebecca), Tom (Bonnie) and three grandchildren. He is also survived by eight siblings, nieces, nephews, and many friends.