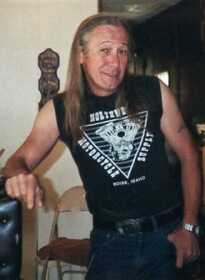 James Patrick Finn, “Pat”, age 71, of Mountain Home, passed away peacefully on Wednesday, January 4, 2023, at his home with his loving wife, Roxanne, at his side. Pat was laid to rest at Mountain View Cemetery on Friday, January 13, 2023.Arrangements were under the care of Rost Funeral Home, McMurtrey Chapel

Pat was born January 20, 1951, in Boise to Wallace H. and Elsie M. (Hubbs) Finn. Pat was a member of Mountain Home High School Class of 1970. Throughout his life, his work in the construction industry took him to many locations across the United States, however he always considered himself a lifelong resident of Mountain Home.

Pat enjoyed riding his Harley Davidson motorcycle with his loving wife Roxanne, as well as his many friends. They regularly took summer trips to Northern Idaho and throughout the Pacific Northwest visiting friends and family along the way. When at home in Mountain Home, Pat often enjoyed working on home improvement projects together with Roxanne, watching old Western television shows and the rooting for the Seattle Seahawks football team.

He was preceded in death by his parents Wallace and Elsie Finn, his stepfather Wilbur “Shorty” Britten and grandson Tyler Reside.