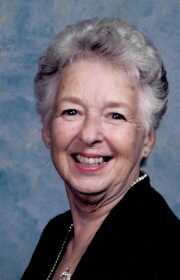 Joan was born in Temple, Texas on September 23, 1930, to Stanley and Mattie (Hester) Clebeck. Having moved to California at a young age, Joan graduated from San Bernardino High School in 1948. In 1950, Joan received her degree in Business from the Skadron College of Business.

While working for Hanford Foundry for 30+ years, Joan was also an enrolled IRS tax agent and was a member of the San Bernardino Eagles Aux 506, she was part of the Red Hat Society and volunteered at the Mountain Home Senior center where she was a Board Member.

Joan’s hobby was having a good time, but her biggest love was for her family. She was a one of a kind, capable, loving, strong, kind and sincere woman. Her wits, charm and sarcasm will be missed by many, and she will forever be in their hearts.

Joan was preceded in death by both parents, her brother Stanley who was waiting to give her a warm welcome and the love of her life Alex Saldana Sr.