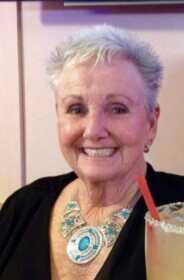 Judith “Judy” Ann Hamilton Mederios was born in Winthrop, Massachusetts, to Julian and Eunice Hamilton on March 11, 1942. She left this world peacefully in her home surrounded by the love of her family and many friends on Monday, October 31, 2022.

A Celebration of Judy’s Life was held at the Desert Canyon Golf Course in Mountain Home on Saturday, November 5, 2022. Cremation was under the care of Rost Funeral Home, McMurtrey Chapel.

Judy and her mother lived with extended family in Winthrop while her dad fought in World War II. Judy’s sister Susan “Sue” joined the family in 1944.

In 1954, Judy moved with her family to Lynnfield and attended Wakefield High School, where she met her love and life partner, Carl. Judy graduated from Wakefield in 1959, and on September 16, 1961 she and Carl married.

As an Air Force bride, Judy lived in Cape Cod, England, Mountain Home, then back home to Lynnfield while Carl was in Thailand during the Vietnam War. When Carl came home they lived in New Jersey, then returned to Mountain Home where Carl retired after 20 years of service.

Judy made lifelong friends wherever she went. Her wit and love of life was evident in everything she did, especially golf – her favorite sport that she enjoyed until recently.

She would try almost anything at least once from parasailing behind a car to jumping off bridges. And Judy could outlast just about anyone when she went to Jackpot for days of golf and gambling.

Judy’s many jobs over the years included ten years at the El Rancho and another ten at Joe’s Club, getting to know and making friends with half the town. Most of the money she made went into making Christmas and other holidays special for her four kids and nine grandchildren. Judy’s wonderful personality was reflected in her beautiful home that she loved to decorate and redecorate with the seasons.

She is survived by her husband Carl, her children Debbie, DeeDee, Donna and Scott (Tiffany), her sister Sue (Rich), her grandchildren, Jacqui (Rich), Derek, Alyssa, Baylee (Anthony), Brock, Trinity, Pierce, Paris and Paisley and her great-grandchildren RJ, Lexi, Lucas, Ellie, Beau, Sawyer, Raelynn, and another on the way.

Judy is preceded in death by her parents, “Hammy” and “Eunie.” Judy was the absolute best wife, mother, daughter, sister, grandmother, great- grandmother and friend. She leaves us all with huge holes in our hearts that can never be filled.