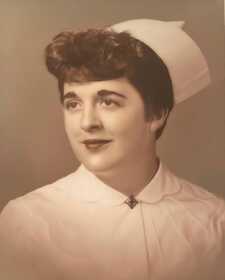 Joanna was born April 8, 1935, to Louisa and John Cristobal in Mountain Home, Idaho. She attended schools in Mountain Home, graduating from Mountain Home High School in 1953. She went on to St. Alphonsus Hospital School of Nursing in Boise, Idaho, graduating in 1956. She married Donal Tate on June 13, 1959, in Elko, Nevada. Joanna and Don had known each other since elementary school and graduated from high school the same year. She was homecoming queen and he was homecoming king, but the two didn’t start dating until after high school. They moved to Dayton in 1966, from The Dalles, Oregon. Joanna told Don Dayton was where they would raise their three boys.

Joanna started her nursing career in California before returning to Mountain Home. She worked as a nurse in several places, including many years as a floor nurse in Dayton, before becoming the director of nursing at Dayton General Hospital. In addition, Joanna started and ran a home health care program at the hospital. She was named Employee of the Year in 1994 by the Dayton Chamber of Commerce. During her career in Dayton, she was instrumental in training countless nurses and nurses aids—many who still speak of her mentorship.

She loved fishing, particularly with her beloved sister, Amelia, who often roped her into stopping at the casino. Camping on the Tucannon was another favorite activity. She taught several of her grandchildren how to drive. She was an animal lover to the core, taking in many strays, and spending more on feeding the neighborhood cats than she did on herself. She loved watching her sons and grandchilren play sports.

She is survived by three sons and daughters-in-law, William and Molly Tate and Wayne and Jill Tate of Dayton, and Terry and Barbara Tate of Bellingham; a brother, John Cristobal of Mountain Home, Idaho; 15 grandchildern; and 8 great-grandchildern. She was preceded in death by her husband, three sisters and her parents.

The family would like to thank the caregivers at Booker Rest Home for the loving care they gave to their “bunny” during the last few months. Corbeill Funeral Home in Dayton is caring for the family. On-line condolences may be made at www.corbeillfuneralhomes.com.