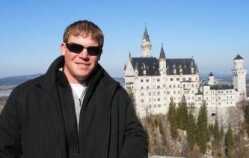 Christopher “Chris” Charles Prichard, 42, of Wallace, Idaho, passed away August 26, 2022 at the Schneidmiller Hospice House of Coeur d’ Alene, Idaho. He was born May 20, 1980 in Abilene, Texas; Chris was the son of Daniel J. and Marsha (Haynes) Prichard.

Seven years of Chris’s childhood was spent in Germany, where his Father served in the U.S. Air Force. For fifteen years, he resided in Mountain Home, Idaho, where Chris still has many life-time friends. Chris moved to the Silver Valley in 2020 from Portland, Oregon.

Chris loved and enjoyed his family, hunting, fishing and sport-shooting.

Chris is survived by his father Daniel J. Prichard of Wallace; his sister Melinda Petersen (Chris) of Portland, Oregon; his niece Emma Petersen; his aunt Judy Hebert of California; and his loyal dog Max. Chris was preceded in death by his mother Marsha Prichard; and his paternal and maternal grandparents.

Cremation will be held.

You may share your special memories of Chris with his family at www.shoshonefuneralservice.com