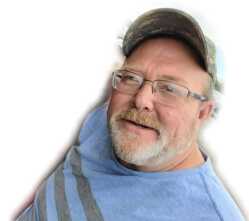 On Wednesday, August 24th, Stacy A. Rutherford, a beloved Husband, Father, Son, and (his favorite title) Papa passed away at the age of 54. Services will be held at Rost Funeral Home Friday, September 2, 2022, at 3:00 pm with military honors.

Stacy was born to Sharon Petzoldt and Jack Rutherford on June 27, 1968, in Mountain Home. Before graduating from Mountain Home High School, he enlisted into the US Army. He operated as a Lance Crew member in Field artillery handling missiles. After his service, he followed in his father’s footsteps and started long haul driving, which he did proudly his entire life. He could have driven back and forth to the moon, more than once (accident free!) with the number of miles he put to pavement. At the age of 26 he married the love of his life, Susie Rutherford.

Stacy liked a good strong drink and collecting guns. He was a lifelong provider, and it was never a question if he would be there for you if you needed him. He gave the best hugs and laughed at the dumbest of things.

Stacy is survived by his wife, children, grandchildren, mother Sharon Petzoldt, two brothers Brad and wife Crystal Rutherford and Aaron and wife Misty Petzoldt, as well as many other loving family members and friends.

Stacy was proceeded in death by his Father, Jack Rutherford, his stepfather, Al Petzoldt and his older brother Gregory Rutherford.

His loss leaves a bear sized hole that will never be filled. He will be immensely missed by many.