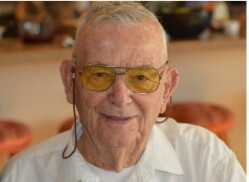 Lt.Col. Kenneth Boyington Ogden, USAF, (Ret.) was born on February 13, 1923, in Chattaroy Washington, and passed away on June 7, 2022, at the Veterans Hospital Community Living Center in Boise at the age of 99.

He was married to Mary Lou Ogden for 75 years before she passed away in 2018. Following his retirement from the United States Air Force in 1968, Ken had been a resident of Mountain Home, Idaho. 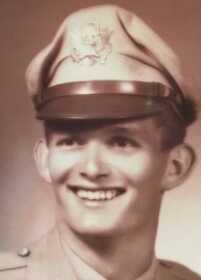 He was preceded in death by his son, Captain Frank Kenneth Ogden, who died in 1982 while serving in the United States Marine Corps, and his grandson, Michael Covey. Ken served four years in the Army Air Corps from 1942 to 1946.

He flew P-51 Mustang fighters in the Philippines where he was shot down by an enemy sniper. His injuries were substantial and took him away from flying which he loved, so he left the Air Corps. He later joined the Washington Air Guard to fly again and he served there from 1948 until he was recalled to active duty as a reservist in 1951 when the Korean War started. In total, Ken provided his loyal service in the military for 26 years traveling to many posts around the world until his final one at Mountain Home AFB where he served from 1958 until he retired in 1968.

Ken loved to hunt and fish and he was good at both. He was a devoted husband, father, grandfather, and great grandfather. He was supportive of his family and offered them his unconditional love. He will be deeply missed by his family and all who knew him. They had great respect for him and held him in the highest esteem.

In recognition of his military service defending our nation, military funeral honors will be provided to Ken at 10:45 a.m. on July 8, 2022, at the Idaho State Veterans Cemetery in Boise. Please join the family in saluting him and telling him goodbye.