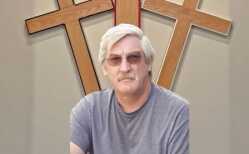 Scott Edward Crandall was born to Hugh J. and Carol Anne Slater (Gale) Crandall on a snowy day in Minnesota. The Family lived in the Anoka area until 1967, when they moved to Glasgow, Montana. They later moved to Mountain Home, Id, where Scott graduated from Mountain Home High School in 1978. He went to culinary training at CSI in Twin Falls and later moved to Elko and worked for Newmont Gold for 35 years, retiring in 2019. He loved to travel and had been to New Zealand and Australia. He also loved working with wood and had done several jobs for people repairing or remodeling the wood structures in their homes.

Scott had believed on and accepted Jesus Christ as his Savior while young and showed the love of Christ by helping others, especially those who had no one else to help them. He was part of the Gideon’s and was a member of Grace Baptist Church since the beginning.

He was preceded in death by his father, Hugh and his brothers, Michael and Shane, his sister Shannon Driscoll, and his grandparents. He is survived by his mother, Carol Crandall, brother H. Daniel Crandall and sisters Colleen Wallace and BethAnne Crandall of Mountain Home, ID and MariAnne Crandall of Elko, NV, and nieces Cheyenne Campbell and Nicole Driscoll, two great nephews Antonio Chavez and Nicholas Campbell and two great nieces Chloe Chavez and Nora Jordan. He is survived by his aunts, Lori Dare of Minnesota and Marian Grams of Missouri, and his uncles Franklin Crandall of Emmett, ID, Leon (Teri) Crandall of Missouri and Francis Gale of Minnesota.