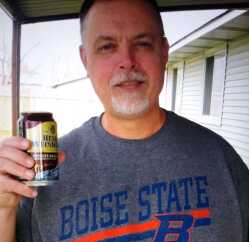 Mark Richard Frederick, 51, of Mountain Home, Idaho, passed away September 27, 2021, at home. Mark was born in Indiana, Pennsylvania on September 30, 1969. At age 19 he enlisted in the United States Air Force, eventually being stationed in Mountain Home, Idaho where he retired in 2011. In 2004 Mark married the love of his life, Adrienne Feekes, and they settled down to raise her daughters Natasha and Samantha and his son Matthew. Mark began working at Marathon Cheese in 2012 and enjoyed making friends with his fellow night shift workers. Mark enjoyed summers on the lake with family and friends and special companion Marci, riding motorcycles with his fellow bikers and holidays with the family. Mark is survived by his wife Adrienne, daughter Natasha Ledet (Shawn), daughter Samantha Feekes, son Mathew Frederick (Tenley), granddaughters Sierra and Addie, his father Roger Frederick, Sr, and beloved canine friend Marci. He was preceded in death by his mother Bonnie Lear and his brother Roger Frederick, Jr. We will always carry Mark’s memory in our hearts, our laughter, and memories. Forever loved, and forever missed.