Rachael Irene Gottsch Jacobsen, age 52 of Mountain Home, passed away Monday, March 22, 2021 at St. Alphonsus Hospital in Boise from blunt force trauma to her head. A memorial service will be held at 10:00AM, on Saturday, March 27, 2021 at the Valley Christian Fellowship Church in Grand View. Cremation was under the care of Rost Funeral Home, McMurtrey Chapel in Mountain Home.

Rachael was born August 8, 1968 to Gail Ulrey in Mountain Home. Gail gave her up for adoption and Virgil and Vivian Gottsch took her home when she was 5 days old. Rachael joined a brother, Jim and a sister, Dorothy and 16 months later another brother, Dan, joined the family.

Rachael attended her first Owyhee County Fair when she was 2 weeks old. She joined 4-H as soon as she was old enough, taking many different projects. She excelled in everything she attempted. Sewing was her specialty. She made her own prom dress when she was a junior in high school and was runner-up in the Idaho State Make-it-Yourself with Wool contest. 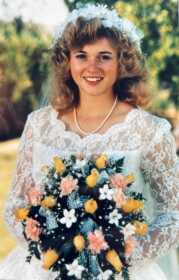 She also had livestock projects, raising fat lambs and fat calves. FFA was one of the organizations she participated in at Rimrock High School. She played the flute and saxophone in band and was a cheerleader and participated in basketball and track. She attended CSI in Twin Falls.

Growing up in Grand View, she hoed beets and moved sprinkler pipe. Her favorite jobs were working in fabric stores.

Rachael married Mike Jacobsen on July 25, 1987 in her parent’s front yard. From this union two children were born, Amanda and Josh. They lived in the Mountain Home area where they both worked for TLK.

She learned braille and worked in the Mountain Home School District with the blind students. She waited tables at Carlos’s. She also worked on the farm, driving truck during harvest. When TLK Dairy started up she helped set up the computer program and registered all the cows.

She was a very kind person and loved spending time with her grandchildren coloring and crocheting. She did not like clutter and was very precise in her housekeeping.

Rachael is preceded in death by her birth mother, Gail Ulrey, her father, Virgil Gottsch, a brother and 3 sisters who died in infancy.