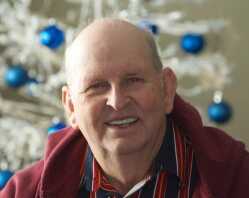 Clinton was born May 12, 1942 in Thornton, Idaho to Stephen LaVern “Vern” and Pauline (Struhs) Perry. He spent the years of his youth in Thornton on the Perry family farm. He graduated from Madison High School in 1960 and continued his education at the Idaho State College of Trade and Technical Education where he majored in carpentry. He apprenticed with Wilcox Construction after the completion of his schooling.

Clint began a two-year mission in October of 1963 with the Church of Jesus Christ of Latter-day Saints in service to the Central Atlantic States (VA, NC and WV) that he completed in October of 1965. He toured Washington DC, New York City and the World’s Fair on his return home.

Clint was once united in marriage to Janae Cook at the Idaho Falls Temple on May 26, 1966. They lived in the Cache Valley, Utah and were blessed with seven children. Clint gradually built up his own dairy herd there, until moving to Buhl, Idaho in 1979, and continuing for another 15 years. He later worked as a cab driver in the Boise area and owned and operated the Bargain Barn secondhand store for several years. The final adventure of Clint’s life led him to Williston, ND doing various jobs ranging from Walmart greeter to taxi driver, to serving anyone he came in contact with.

Clint was a collector of all things, with an adventurous soul his entire life. He was a lifelong member of the Church of Jesus Christ of Latter-day Saints. Clint enjoyed spending the day with a fishing pole in his hand and in the company of family and friends. He will be missed dearly by all who were blessed to share in his life.

Celebration of Clint’s Life: 1:00 pm Friday, March 26, 2021 at the Church of Jesus Christ of Latter-day Saints, 1805 26th Street W., Williston. To view a stream of Clint’s service or to share memories and condolences, please access his obituary page at www.thomasfamilyfuneralhome.com