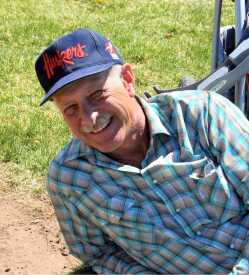 David Blake Wurdinger, of Idaho City, formally of Mountain Home, passed away on March 2nd, 2021 at the age of 66. David was born April 29, 1954, in Sioux City, Iowa, to Eldon and Deloris Wurdinger. He was the oldest of 4 siblings. Growing up, David was an athlete of many sports. His favorite teams were the Nebraska Cornhuskers and the Minnesota Vikings. After graduating from Columbus High in 1972, he enlisted in the United States Air Force. His second and final base was Mountain Home AFB, where he retired as Master Sergeant. David moved to Hammett in 1998, raising farm animals, gardening, hunting, fishing, and spending time with his grandchildren. He built a deck around his pool with a slide for his grandchildren to enjoy. Papa’s house was the best. David loved to have bacon, eggs, and toast every morning. He collected John Wayne movies and always enjoyed a good western. He met his wife Denice, in 2016 and moved to Idaho City. He spent his days there trapping and hunting with his good friend, Chris Heacock. David was a volunteer firefighter for the Idaho City Fire Department. David is survived by his father, Eldon Wurdinger, of Columbus, Nebraska; his wife, Denice Wurdinger, of Idaho City; children, Cher (Aaron) Weiss, of California, Danielle (Andrew) Woodland, of Tooele, Utah, and Sarah Wurdinger, of Mountain Home, Idaho, and step-daughter, Marie (James) Rouse; his brothers, Doug Wurdinger, Dana (Pegg) Wurdinger; his sisters, DeAnna (Tim) Brandt, and Denise Marr, all of Columbus, Nebraska; and his grandchildren; Lexus Amundson, Jordan Burns, Acelyn and Andrea Woodland, Carson and Grant Weiss, and Addison Rouse. David is preceded in death by his beloved mother, Deloris Wurdinger. A celebration of life will be held on May 16th, at the Idaho City Fire Department, time TBD.