A Message from Rep. Matthew Bundy 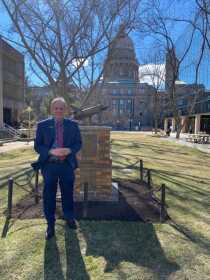 I take short walks on occasion around the Capitol and it is amazing what I find. Across the street from the Capitol, I found this beautiful monument to the Challenger space shuttle crew. This was a tragic accident that happened in January of 1986. The Space Shuttle Challenger exploded shortly after takeoff and the entire crew was lost. This was the flight that was taking the first teacher into space. That teacher was Christa McAuliffe. Seeing this reminder caused me to reflect on what I was doing when the event happened. This was one of those events that was so impactful to a generation, that we all seem to remember what we were doing when we watched the event or first heard about it. I was in flight school with the United States Air Force and we all took a break from training to go watch the launch on television. We all cheered when the Challenger took off, but tragedy struck within a few minutes after liftoff. The room was somber and it was hard to resume training that day. That day spurred many things, but it did give the world a chance to see the importance of a science teacher from Idaho and the influence she has had on education in our state and in the country. I just wanted to share my thoughts on an event that has been so very important, but at the same time is fading into history.