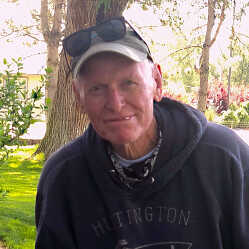 Mountain Home — Roy Leonard DeVore Sr., 71, passed away at home on Tuesday, December 15 after a year-long battle with pancreatic cancer. Leonard was surrounded by his loving wife of 51 years, Beth, and their three sons. Leonard faced this disease with typical courage, often telling others that this battle was not a tragedy, as he had lived a good life, knew he was loved, and was right with the Lord. Born on April 10, 1949 in Torrance, California to Helen (Oliver) and Alvin “Red” DeVore, two transplants from Arkansas and Oklahoma, respectively, who met in California after moving to serve in the war effort during WWII. Leonard often spoke of his Southern California upbringing in idyllic terms, as a mix of time on the beach, exploring the desert and cruising the open roads, much like the scenes in American Graffiti. As a student at South High in Torrance, he went by Lennie, both on and off the football field. It was during this time at South High that he met the love of his life Beth (Noble). Leonard and Beth set an impossible romantic standard for the rest of their family and friends, as they started dating at 14 and 15 years old, eventually marrying a year after Beth graduated from high school.Leonard worked as a computer operator for five years at Garrett AiResearch, where his father-in-law, Neil, also worked, but Neil also claimed to have not gotten him the position. After a trip to Montana’s Flathead Valley in 1970—where Beth’s family was from and she was born—the young couple, along with their first child, Roy Leonard Jr. “Lenny,” made plans and eventually moved to Polson, Montana, in 1972. Sons Travis and Chris joined the family in the coming years, while Leonard began a career with the City of Polson Parks Department, eventually becoming the Superintendent of Streets and Parks. Leonard spearheaded many projects while with the city, including getting the bulkhead built in Sacajawea Park, the softball complex constructed on Kerr Dam Road, and the upgrading of the baseball field at O’Mally Park for the newly founded Mission Valley Mariners American Legion baseball team. Beth and Leonard were key members of the group to get the American Legion baseball team playing in the valley in 1990.Leonard also served as the groundskeeper for the local public golf course and 25 years as a Polson Volunteer Fireman. Leonard volunteered as a youth baseball coach, and also befriended and mentored the friends of his boys. After Leonard retired, he and Beth explored more of Montana, as Beth served as Postmaster of Big Arm, Hot Springs,and Shelby, along with temporary appointments in other parts of the state. This allowed Leonard to pursue two of his true passions, hunting and fishing all around his treasured state of Montana, before moving to Idaho to live out his final years close to his sons and their families. Leonard was an avid baseball fan, and he enjoyed watching his children and grandchildren play and coach the sport, from t-ball on. He also watched or listened to the Dodger games on a daily basis, and he was appreciative of the Dodgers winning the 2020 World Series in his honor. Two of his closest companions late in life were his hunting dogs Shelby and Chili (“his girls”). Leonard is preceded in death by his beloved sister-in-law Marion and his parents. Leonard is survived by his wife Beth; sons Lenny (Jen), Travis (Sarah), and Chris (Hannah), as well as the son he always wanted Todd (Delia); grandchildren Marion (Jordan), Christian, Torrance, Lilly, Evie, David and Thomas; brothers Russ (Barb) and John (Dee) and in-laws Mike (Quinci), Ronn (Linda), Paul (Georgia) and Dennis (Jennifer); and many nieces and nephews.

Funeral arrangements are under the care of Rost Funeral Home in Mountain Home, and a celebration of life ceremony will be held in Polson, MT during early summer. Tributes to Leonard can be made to the Mountain Home Arts Council Endowment Fund. Go to the Mharts.org to donate.