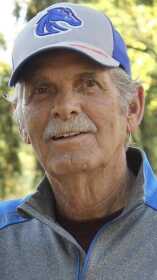 Val was born to Verne and Marian Jones on December 22, 1946 in Shelley, Idaho. Val graduated from New Plymouth High School in 1965. In high school he was active in sports with a particular passion for both basketball and baseball.

Following high school Val enlisted in the US Navy where he served as an Electronic Mechanic – ET-1527 during the Vietnam War era. He was stationed in Wahiawa, Hawaii at NCTAMS PAC Naval Base. While visiting Sunset Beach near the Naval base Val met the love of his life Patricia Kay Taylo who was vacationing on the island. After 3 months of courting the two were married at the naval base chapel on February 15, 1969.

After his honorable discharge from the Navy, Val had a diverse work career holding jobs in construction, electronics, manufacturing, dairy farming and trucking. Val’s example of hard work and courage in the face of adversity has become his family legacy. He retired from driving truck in 2012 and spent his retirement years enjoying sports, grandkids, family and country life. Other activities and interests throughout his life included surfing, hunting, MGB cars, golf, bowling, boating and college sports (in particular Boise State Football).

Val came to faith in Christ and was baptized behind the Bruneau Community Church in the Buckaroo Ditch on August 29, 1982. Val joined his family as a member of the Church. Val’s life from this point forward was impacted by his trust in God. He often quoted Philippians 4:13 which says, I can do all things through Christ who strengthens me.” His Christian walk was characterized by his integrity, his tender heart and his gentle and quiet spirit.

Val is survived by his wife Patricia, his daughter Angela (Carl), his son Destry (Crista) and his six grandchildren: Lillie (21), Cambriah (20), Kileigh (19) Natalie (13), Dash (6) and Lola (4), as well as his brother Bruce (Leann), his sister Donna, and sister Sherrie (Charles) along with many other nieces and nephews.

Deceased are his mother and father Verne and Marian Jones, his brother Allen, brother-in-law Jim Stephens, and nephew’s Wayne Smith and David Stephens.

“Be strong and courageous. Do not be afraid; do not be discouraged, for the Lord your God will be with you wherever you go.”