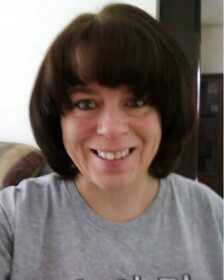 Theresa June Jacobs, 54 of Mountain Home, ID, passed away during the early morning hours of November 9th, 2020 at her home surrounded by family and friends. Teri was a beloved wife, mother, grandmother, daughter, sister and aunt.

Teri was born September 20th, 1966 in Belleview, Washington to Lela (Heath) Morrison. Teri spent the majority of her life living in Idaho.

Growing up in Hammett, ID, Teri lived and breathed anything equine. Lester and Mildred Heath would purchase wild mustangs from BLM auctions and Teri would spend her days breaking these horses and shaping them into excellent contenders for showmanship, pole bending and barrel racing. Many ribbons, trophies and tack would shroud the walls of her tack room. Teri’s passion for Rodeo and her beloved horses earned her the crown in Rodeo royalty.

Teri met the love of her life, Dennis Jacobs in 2008. Teri and Dennis made it official and were wed in 2019. Teri’s greatest gift was when she became a grandmother to Josie Baudendistel in 2019.

Teri held many jobs in her life but her true calling was realized when she became employed with Addus Homecare in 2011. Teri was employed with the company until she passed away and had touched so many lives as a caregiver.