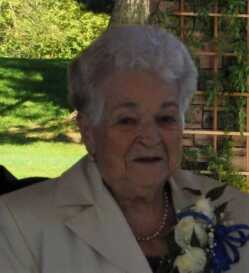 Alice Garmendia, age 95, of Henderson NV and longtime resident of Mountain Home, passed away peacefully in the early morning hours on November 1, 2020. A viewing will be held on November 9, 2020 from 3 pm to 5 pm at Rost Funeral Home, McMurtrey Chapel for all who wish to pay their respects. Alice was born August 24, 1925, in Bridgeport Connecticut to Frank and Concepcion Lopez. She met and married the love of her life, John L. Garmendia on July 9, 1946. Alice came to Idaho with her husband, first living in Nampa and finally settling in Mountain Home. Alice started working for School District 193 in December 1962 as a secretary at East Elementary and moving on up to the District’s main office as the Secretary/Treasurer until her retirement on September 30, 1983. After retirement Alice spent her time being creative and learning all types of new hobbies. Her children have benefited from whatever craft was her passion at the time and she had lots. Alice is survived by her 4 children, Linda (Loren) McGrath, Mary Ann Garmendia, Bud (Cherrie) Garmendia, and Kathy (Ken) Robertson. Her grandchildren include, Tony, Tashawn, Shane, Brian, Brandi, Brianne, Brett, Brad, Jasmine, Heather and step-granddaughter Shyanne. She also has 3 great-grandchildren. She was preceded in death by her husband John, her parents Frank and Concepcion, stepmother Tina, and her 3 brothers Richard, Manual and Frank Jr. In lieu of flowers, the family asked for contributions be made to your favorite charity.