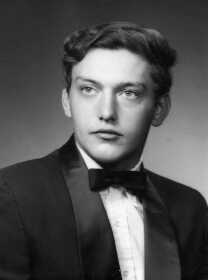 A memorial service will be held at 11:00AM, on Wednesday, September 2,

2020, at the First Baptist Church in Glenns Ferry. Arrangements are under

the care of Rost

1970, and he married Roxie Lisle in January of 1971. Dick joined the Idaho National Guard

Reserve soon after. He spent most of his young adult life as a farm foreman with his dad Bob, farming on Bell Rapids, Black Mesa and helping develop Sandy Acres.

After the family moved on from farming he worked at the Sailor Creek Bombing Range as a contractor maintaining the facilities, training sites and putting out brush fires. When the contract was over he began his career with Western Farm Service in Glenns Ferry.

On February 23, 1991 he married Carolynn Clymer. In February of this year they celebrated their 29thanniversary.

Dick loved to go camping and fishing. His favorite area to go was in the Sawtooth Mountains north of Fairfield near the Smokies. He also spent lots of time sturgeon fishing on the Snake River.

He is survived by this wife Carolyn of Glenns Ferry, son Chad Gri

Memorial Contributions may be made in Dick’s name to the First Baptist Church in Glenns Ferry or the Glenns Ferry VFW Post3646.