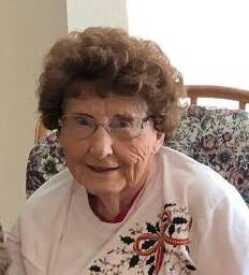 Ruth Knox, 96, died August 13, at the family home in Grand View, Idaho surrounded by her husband and family. She was born December 24, 1923 in Creswell, Oregon the daughter of Matthew & Frances Wilson Kirkpatrick.

She attended Creswell schools until her Senior year when her family moved to Springfield. Even though she graduated a member of the 1942 Class of Springfield High School she always considered herself a member of Creswell High School Class of 1942 and she enjoyed attending the annual Creswell community class reunions with her sisters and brothers.

Upon Graduation from Eugene Business College she was hired by the City of Eugene where she was the only female employee in Eugene City Hall. She would laugh and say, “I did everything, I wonder what they all do now?” May 5, 1944, she and Clifford Knox, of Springfield, were married in Eugene, OR when his ship,

In 1952 they moved to Shoshone Falls, near Twin Falls, ID then to C. J. Strike Power Plant near Grand View in 1956. She worked for Gem State Utilities,(Telephone Company) in Grand View.

When the company was purchased by Century Tel, she accepted the position of manager, which she held until her retirement.

She enjoyed all card games and was an excellent Bridge, and Pinochle player. She treasured time at the Oregon coast; Lighthouses & Watermelon. Most important to her were her family and time with them.

along with their good friends affectionally called her “Gang”. In addition to her parents Ruth was preceded in death by her Two sisters: Helen Brush, & Doris Miller; Three Brothers: Donald, Eugene & Carroll Kirkpatrick.