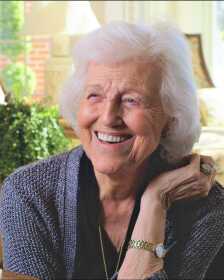 The angels have gloriously welcomed their dear friend Marie Goldbach into heaven. She passed Thursday, July 16th, 2020 at her home, 103 East Fourth Street, in Marathon City.

Marie was born July 2, 1921 in Marathon, daughter of the late August and Elizabeth (Kaufmann) Seubert. She married Raymond A. Goldbach on August 28, 1946 at St. Mary’s Catholic Church, Marathon. He preceded her in death on September 26, 1997.

Marie and Ray were lifelong residents of Marathon City. They founded Marathon Cheese Corporation together in 1952 in Marie’s parents’ basement. Marathon Cheese is credited with pioneering many cheese marketing and packaging innovations that transformed the way cheese was sold throughout the United States; innovations that are seen on grocery store shelves around the country to this day. In her role, Marie was the steady, consistent, and calming force that was integral to the company’s success. Today, Marathon Cheese has four manufacturing facilities in three states and employs thousands of people. The Goldbachs also created Packaging Tape, Inc. (PTI), now known as Rocket Industrial, a company that distributes various packaging supplies and equipment through several locations across the U.S. Since her husband Ray’s death, 23-years ago, Marie has guided Marathon Cheese and Rocket Industrial to even greater heights. “Don’t judge someone until you’ve walked in their shoes, ” and, “What are the facts?” were phrases she could often be heard saying.

Marie and Ray received the “Person of the Year” award in 1985, presented by the Marathon City Business Association, honoring their outstanding civic and business leadership. They built the Marathon Swim Center as a means of giving back to the community. They also instituted college scholarship programs at multiple high schools in addition to a scholarship program for the children of Marathon Cheese Corporation and Rocket Industrial employees. Their foundation supports a multitude of philanthropic efforts, locally, and nationally.

Those closest to Marie will remember her most for her glowing smile, witty charm, and elegant and graceful, style. In her humble way, she could regularly be heard responding, “Jesus is listening!” after receiving a compliment. And as she became more frail, her Grandson recalls saying to her, “You’ve got to be pretty strong to get to your age, Grandma…”

“…Or stupid!” She quipped back with a twinkle in her eye, waiting for a chuckle.

Her gentle touch, her warm heart, and her constant concern for all the employees, will be deeply missed. Even in her final days, “How are the employees?” was a question she was still regularly asking. She was a lover of art, classical music, and Maltese dogs (Tashi and Amicus). She enjoyed traveling, and also had an appreciation for the smallest details in life, regularly admiring the intricate beauty in flowers, and looking with wonder at the birds in her backyard. And throughout the year, she was often putting another log in her fireplace…it seemed she could never be too warm. But Sundays—her favorite day of the week—were for mass in the morning, and Sam’s Pizza at night. She’s probably already enjoying a medium “pepperoni, sausage, and onion” in heaven with Ray and their friends Mr. and Mrs. Parella.

Marie is survived by the twin daughters she had unconditional love for, Elizabeth (Betsy) Goldbach and Mary Goldbach Gallagher, both of Tierra Verde, Florida; one grandson, Ryan (Mary Tokarz) Gallagher, and two great-grandsons, Jude Raymond and John “Jack” Liam Gallagher, all of Wausau, Wisconsin. Also surviving are two sisters, Angela Kannenberg and Judith Stroik both of Chandler, Arizona; brother-in-law, Don Menzner and sister-in-law, Iris Goldbach, both of Marathon; special friends, Nancy and John Skoug, and many nieces and nephews – she had tremendous compassion and love for all of her nieces and nephews. In addition to her husband and parents, Marie was also preceded in death by four sisters, Lorraine Seubert, Margaret Sekorski, Rita Menzner, and Elizabeth Buchberger and one brother, Charles Seubert. Many members of Marie’s family were instrumental in helping Marathon Cheese succeed, especially her dear sisters—one even moved to Booneville, Mississippi to start a production facility in the 1960s; Marie’s niece oversees that facility today.

Mass of Christian Burial will be a closed, private, invitation-only, ceremony due to Covid-19, but will be available to watch online through Peterson-Kraemer’s Facebook site, streamed live on Monday, July 20th 2020 at 12:00 P.M. from Nativity of the Blessed Virgin Mary (St. Mary’s) Catholic Church in Marathon. Reverend Monsignor Joseph Diermeier, pastor, will preside. Burial will follow in the parish cemetery. The family will receive friends at St. Mary Church, Marathon, on Sunday from 3:00 PM to 7:00 PM. In lieu of flowers, please consider memorials in Marie’s memory to Nativity of the Blessed Virgin Mary Parish, Marathon, or the Marathon Area Swim Association, Marathon.