Protest and counterprotest converge on Carl Miller Park over the weekend 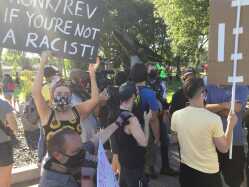 On Saturday, July 11, a group of protesters met at Carl Miller Park to bring awareness to racism and police brutality where they were met by a group of counter-protesters who said they were there to protect the F-111 Jet in the park and to defend town property if needed. Those fears were unfounded as the small group of protesters held signs and shouted now familiar phases such as ‘Black lives matter’ but were relatively peaceful even with the presence of the larger, and mainly older group who stood against them.