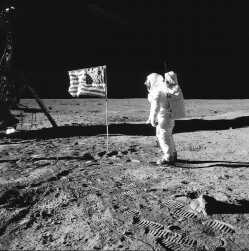 On the morning of July 16, 1969, the United States of America took a giant leap forward in the ‘space race’ as the Apollo 11 Lunar Landing Mission launched into orbit from the Kennedy Space Center with astronauts Neil Armstrong, Buzz Aldrin and Michael Collins aboard.

After traveling 240,000 miles in 76 hours Apollo 11 entered into a lunar orbit. The next day as the United States and the world looked on lunar module Eagle touched down on the edge of the Sea of Tranquility as Mission Commander Armstrong radioed to NASA head quarters in Houston that “the eagle has landed.” For the full story, pick up a copy of the Mountain Home News or click on this link to subscribe to the newspaper's online edition.