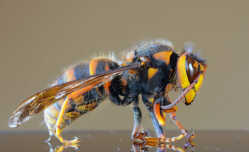 The Asian giant hornet, nicknamed the “murder hornet” by the media and the public, has been on the front page of varying news outlets and Facebook feeds recent weeks. It’s true binomial Latin name to entomologists and biologists is Vespa mandarinia and was discovered and named in the mid 19th century by Frederick Smith. The Asian giant hornet is the world’s largest hornet with a moderately painful sting (rated 2 out of 4 by the Schmidt Sting Pain Index), compared to some of our native hornet/wasp/yellowjacket species (which typically rate as a 1 out of 4 on the Schmidt Sting Pain Index). Locally in Idaho we do not have any true hornet species (of the genus Vespa), but we do have our native bald-faced hornet, a closely related species with the Latin name Dolichovespula maculata. Asian giant hornets native range includes numerous countries from the southern tip of India to Russia and east to Japan.