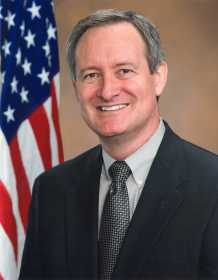 In recognition of Flag Day, I wrote this column weeks ago to commemorate our flag and national anthem. Today, as our country grapples with division and some have used the flag in expressions of rage, I questioned whether to submit it. However, I determined that especially now we should remember the inspiration of our national symbols as beacons of hope and unity. Our flag is not the symbol of a nation without flaws, but rather a symbol to inspire hope in the ideals we collectively hold. I am convinced that we are more united as a nation than we are divided.

The American Flag written about in the poem that became our national anthem is on permanent exhibit at the Smithsonian’s National Museum of American History in Washington, D.C. Mary Pickersgill made the flag in 1813. As the Smithsonian reports, the flag was, “Raised over Fort McHenry on the morning of September 14, 1814, to signal American victory over the British in the Battle of Baltimore; the sight inspired Francis Scott Key to write ‘The Star-Spangled Banner.’” The grandson of Lieutenant Colonel George Armistead, who led the defense of Fort McHenry and commissioned the immense flag, loaned and later gifted the flag to the Smithsonian. The museum preserves and displays the flag for the public to view this historic national symbol.

As historians recount, Francis Scott Key was an attorney working to negotiate the release of an American detained by the British attacking our coastal cities in the War of 1812. This put Francis Scott Key aboard a ship in view of the British attack on Fort McHenry. The British forces had already burned our U.S. Capitol and other public buildings in Washington, D.C., before attempting to take Baltimore, Maryland. However, American forces held Fort McHenry through an intense bombardment, and the British withdrew, marking a turning point in the War. “Waving proudly over the fort, the banner could be seen for miles around—as far away as a ship anchored eight miles down the river, where an American lawyer named Francis Scott Key had spent an anxious night watching and hoping for a sign that the city—and the nation—might be saved,” reads a Smithsonian narrative.

The enormous sense of relief, hope and elation Francis Scott Key must have felt in seeing the Star-Spangled Banner raised after a long, harrowing battle is unmistakable in the words he penned:

“O say can you see, by the dawn’s early light,

What so proudly we hail’d at the twilight’s last gleaming,

Whose broad stripes and bright stars through the perilous fight

O’er the ramparts we watch’d were so gallantly streaming?

And the rocket’s red glare, the bombs bursting in air,

Gave proof through the night that our flag was still there,

O say does that star-spangled banner yet wave

The importance of this national symbol and the hope it inspires is at the heart of the creation of Flag Day, celebrated on June 14. Flag Day recognizes the Second Continental Congress’s establishment of our national flag on June 14, 1777. In the 243 years since, our flag continues to fly over our national triumphs and provides a solemn salute to our fallen. As Americans, we understand the significance of the flag as a symbol of our unity and strength. May our Star-Spangled Banner forever wave over our land of the free and our home of the brave. May it be a beacon of hope around the world and in our nation.