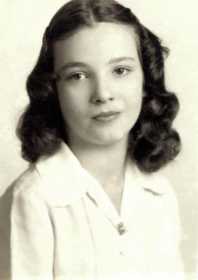 When Merla was 16, she worked after school at the Oregon Trail Restaurant in Mountain Home as a waitress. She quickly became the favorite of long time cook, Ollie Becker, who loved to tell Merla stories about her family; most often featuring her son Leonard’s career in the Army.

Time passed and one day as Merla walked down the street, a truck drove by carrying two young men, one of whom leaned out the window and sprayed her with a water gun. The Culprit was called “Speck”, a G.I. home on leave. The driver was Specks best friend, Kenny Pierce and luckily, he happened to know Merla. Upon learning of Speck’s interest in her, Kenny set up a half-blind date. Merla and Speck met at the movies for their first date and hit it off.

A couple days later, Speck donned his Army uniform and visited the Oregon Trail. Merla hadn’t seen him in uniform before and didn’t recognize him right away. His mother Ollie, however, raced out of the kitchen to greet him. Ollie turned to Merla and introduced her to her son, Leonard, often called “Speck” on account of his freckles. Two weeks after meeting one another, Merla and Leonard were engaged.

Leonard shipped out to fight in Korea soon after. Two years later and having returned from the service, he went to pick up Merla to have lunch from the high school. She asked if her best friend could come along too, and Leonard replied “sure, if she wants to come on our honeymoon with us!” They drove together to Elko, Nevada and got married that day, February 18, 1954.

Merla and Leonard were an inspiration to their family and those who knew them. May their love be eternal and their reunion joyous.

Merla will be laid to rest with her husband Leonard at Mountain View Cemetery. Services are under the care of Rost Funeral Home, McMurtrey Chapel.