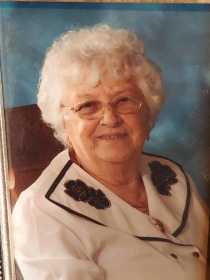 Born in Wuppertal, Germany on December 1, 1926. Wally’s childhood was very tough, loosing her mother at the age of 4, she was the youngest of 7 children. She survived a Hitler ran war torn Germany. In 1946 she met her knight in shining armor Paul E. Butler stationed in Germany during World War II. They married and had their first child Barbara Jean in 1948.

Spending the next ten years stationed at military bases in Maine, New Mexico, then Banbury England where in 1958 the welcomed a son Gary Paul. In 1965 they moved to Mountain Home. Wally became a cheerful face at the MHAFB chow hall where she worked till her husbands sudden death in 1974.

Following his death Wally returned to Germany where she spent the next 27 years traveling Europe with her family and friends.

In her 70’s, she returned to Mountain Home to be close to her family. In 2001 she married Grover Sibley whom she was with until his death 2007. Wally remained in Mountain Home caring for her beautiful flower gardens and her dog Dolly.

In 2013 she moved to Ontario, Oregon to be with her daughter. On February 4, 2020, she gained her angel wings. She was a wonderful mom, grandmother and great mother. She lived a amazing life, loved by many and will be dearly missed.

As per her request no services will be held. She will be laid to rest next to her husband Paul. In lieu of flowers please give to your favorite animal charity.