This Month in History: The ramifications of the Volstead Act becomes apparent as Americans drink more then ever before 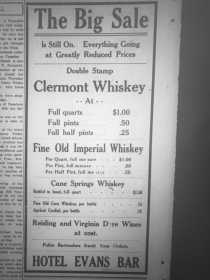 Advertisements like this were showing up in newspapers across the nation as states and then the nation began to “go dry.” Prominent citizens would use the opportunity of sales like these to stock up on as much alcohol as they could get their hands on.

In last week’s history piece Idaho had became one of the states that chose to implement prohibition laws ahead of the National prohibition on alcohol. In the minds of many of the temperance movement supporters prohibition in Idaho would be ‘easy.’ After all many people in the state already abstained from drinking the ‘devilish’ substance. Citizens quickly realized it would not be as easy as to regulate as people had thought.

‘Dry Crusaders' led by organizations such as the American Temperance Society and the Anti-Saloon League were continuing to push for nationwide prohibition. The groups blamed alcohol for many of society's "ills" and considered saloons to be the cause of debauchery and evil. With a growing number of the population behind them the 18th Amendment to the Constitution of the United States of America was proposed on Dec. 18, 1917, almost a year after Idaho joined many other states in banning intoxicating liquors. On January 16, 1919 the amendment was ratified by 36 of the 48 states, including Idaho. Eventually all the states but Rhode Island and Connecticut would ratify the 18th Amendment.

In October of 1919 the Volstead Act was passed clarifying the amendment by banning the manufacture, sale and transport of any 'intoxicating liquor.' It was also illegal to own any item designed to manufacture alcohol. For the full story, pick up a copy of the Mountain Home News or click on this link to subscribe to the newspaper's online edition.