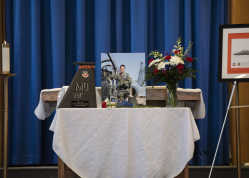 A table is set as a memorial or the late Cpt. Ryan Gipson, 391st Fighter Squadron wing munitions manager, during his memorial ceremony, Jan. 17, 2019, at Mountain Home Air Force Base, Idaho. This cermeony was held to celebrate the life of Cpt. Ryan Gipson and his honorable years of service in the United States Air Force. (U.S. Air Force photo by Senior Airman Tyrell Hall)

MOUNTAIN HOME AIR FORCE BASE, Idaho -- The men and women of Mountain Home Air Force Base bid a final farewell to a fellow Gunfighter at a memorial ceremony to honor his memory, Jan. 16, 2020.

Capt. Ryan S. Gipson, call sign “Rooster”, was the 391st FS’s wing munitions manager. He passed away after battling medical complications. While his passing was felt in the hearts of all who knew him, his memory was immortalized in a moving memorial ceremony.

The ceremony began at 10 a.m. at Liberty Chapel. There was no shortage of attendants as over 100 people graced the chapel courts to offer their condolences and respect to Gipson and his family.

A memorial table was set in the front of the room which held Gipson’s picture, a bouquet of flowers, and a squadron-signed model image of the famed F-15E Strike Eagle which he flew. The American flag sat just over the tables shoulder.

Leaders from all over the wing came to speak in reverence of Gipson’s example of excellence and dedication. They spoke of his prowess as a fighter pilot, his skills in mentorship, and his kind heart. He was also a talented vocalist and during the ceremony they played a recorded rendition of “Danny Boy”, sung by Gipson.

In academia, his drive for superior performance earned him a perfect academic score in the Air Force’s flight school. He would later become a key player in the success of critical weapons testing.

As an operations supervisor, Gipson’s knowledge of F-15 tactics was regarded as unmatched. He directed the flight hour program for the combat Air Force’s largest fighter squadron, achieving over 2500 sorties.

Gipson answered his nations call and fulfilled his duty to his country honorably and without falter. His excellence in leadership led to many Air Force successes and victories.

Now the lights on the Gunfighter airstrips shine a little less bright in his absence, as the Air Force has not only lost an outstanding military officer, but a model example of Airmanship and devotion to duty.

He will not be forgotten.

“Let us remember how precious he was to us and rejoice in his memory,” said Col. Tony Lombardo, 366th Fighter Wing chief of staff. “Let today be the day we celebrate Ryan’s love of life and his service to his country.”

In life, Gipson’s light enriched the lives of everyone around him. He was truly a wingman, leader and warrior. He was his nation’s sword, shield, sentry and defender. He did not fail.

Now he soars through the wild blue yonder bearing that same light as a guardian of the skies. The Gunfighters are honored to have served with Capt. Gipson.