Man rescued after falling into cave 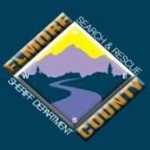 A Boise man remains in fair condition after he fell into a cave near Tipanuk on Tuesday.

Jordan Jones and a friend were on their lunch break when they decided to stop by the cave, located just off the Old Oregon Trail Highway near Tipanuk, said Steve Raber from the Elmore County Search and Rescue team.

"They were simply curious" and went to take a look in the cave, Raber said.

As he was climbing out, Jones apparently lost his footing on an icy patch of rock and fell nearly 25 feet back down into the cave, said Alan Roberts from the Mountain Home extrication team. Jones, who stands near six and a half feet and weighs nearly 300 pounds, fractured a leg bone just above his ankle from the force of the impact.

Jones' friend was already out of the cave and called for help just after 2 p.m. The rescue team included five members of the local extraction team and eight members of the county search and rescue group in addition to paramedics.

It took two hours for rescue crews to pull Jones out of the narrow cave. He was flown by air ambulance to St. Alphonsus Regional Medical Center in Boise. In addition to his injuries, he was also suffering from hypothermia.

According to Roberts, neither man was prepared to go cave exploring.

"They were in there wearing tennis shoes and jackets," he said.

Smith's Crack remains a popular destination for amateur and veteran spelunkers -- the official name for cave explorers -- with hundreds of people traveling from as far as the Treasure Valley to visit. Most caves in southern Idaho are lava tubes, formed by volcanic activity approximately 17,000 years ago. Smith's Crack is actually a fissure -- a crack that opened when lava from the volcanoes cooled.

The entrance off the rural highway is no more than three feet across and surrounded by boulders. The fissure opens into a small chamber that extends down about 25 feet into a narrow tunnel that continues another 200 yards, Roberts said.

On average, local rescue teams are called to pull someone out of Smith's Crack about once a year, Roberts said. In most cases, people get wedged in the narrow tunnel below ground.

"It's not deep enough that people need ropes to get inside, but the biggest thing to remember is that people should know where you're going," Roberts said to those thinking about exploring the cave. In addition to proper gloves, appropriate footwear and lights, explorers should never go alone, he added.