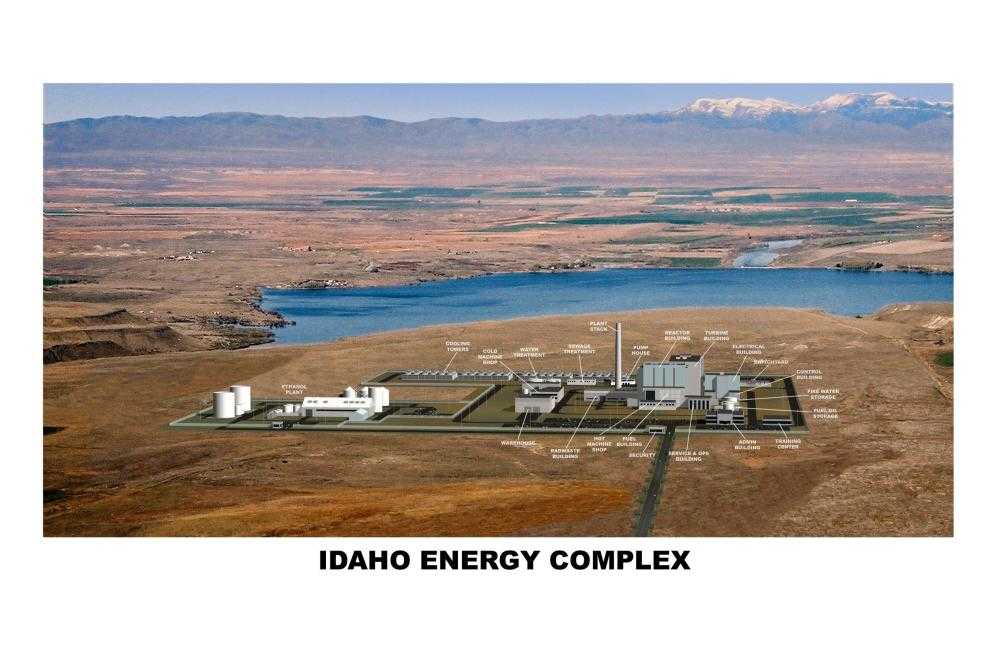 A rendering of the proposed Idaho Energy Complex near Grand View.

Owyhee County has received an application to build a nuclear plant from Alternate Energy Holdings Inc.

The company is proposing to build a $3.5 billion, 1,600-megawatt nuclear/biofuels facility in the Bruneau/Grand View area.

Last Monday, the Owyhee County Commission unanimously voted, at the request of AEHI, to waive the requirement that the application be processed in 125 days, in order to give time to consider the complex proposal.

"The Idaho Energy Complex (IEC) will provide a reliable source of revenue for Owyhee County and the state of Idaho," said Don Gillispie, President and CEO of AEHI. "I can assure you we're never going to outsource this to China. Idaho can and should bolster its economy with energy generation."

The county's deferral of the 125-day time limit will allow the local and federal processes for the power plant to run concurrently.

The county also deferred a fee schedule for the application, while the county receives more information on how much it should charge for processing the complex application.

The county will rely on the assessments of the Nuclear Regulatory Commission regarding the plant's technical aspects, freeing the county to focus its attention on the local effects of the construction process on roads, schools, public safety and related services.

"Owyhee County has signaled it wants to move forward and we are confident we will meet the county, state and federal requirements for this plant," Gillispie said. "This is a key step that must be taken to realize the dream of a profitable, stable industry for Owyhee County and for a plentiful, safe and reliable power source for Idaho and our region."

The NRC approval process will take about three years, Gillespie said, which will include public hearings and informational meetings by Owyhee County and the NRC.

Planning consultant Mark Pecchenino, president of Pecchenino and Associates, Inc., and a former chief planner at Ada County, prepared the application. A project time line is available at www.idahoenergycomplex.com.

"No one can say we're rushing this -- we have asked the county to remove its typical 125-day deadline for setting applications for hearing, to allow the extra time to conducts its planning and zoning commission hearings while the federal Nuclear Regulatory Commission review process is going on," Gillispie said.

"We trust that this will allow the county to make good use of the NRC process as part of its own review, which includes the highly detailed economic, environmental and technical assessments required by the NRC."

Owyhee County residents have already spoken out about nuclear power. In an AEHI-sponsored informational meeting May 31, and in official public meetings about the county's proposed energy plan July 11 and 12, residents generally offered support for the plant.

Owyhee County will announce further meetings, including official public hearings, as the approval process gets underway.

Gillespie said some highlights of the application submitted to Owyhee County include:

* A proposal for a Generation 3 advanced reactor, which will use just 100,000 gallons of water a day for cooling, compared to the 30 million gallons a day typically associated with second-generation reactor types.

There will be no effect on surface or groundwater supplies and a complete hydrology report will be prepared as required by the NRC.

* The IEC complies with the Owyhee County Comprehensive Plan, which states the county will aid in the recruitment of non-polluting light industries to the county and pursue economic development.

* The IEC complies with the 2007 Idaho Energy Plan, which found Idaho is vulnerable to the economic effects of federal regulation of carbon dioxide and mercury emissions from coal fired energy facilities. The plan calls for "diversifying the state's energy production and reducing reliance on imported power."

* Nuclear facilities are among the most secure facilities in the nation.

Post-9/11 FBI reports found commercial US nuclear facilities were more secure than any other facilities, including military bases. "This is due to well-trained and well-armed security officers; a dedicated contingency response force; biometric and other sophisticated plant access equipment; intrusion detection technology; surveillance; and bullet-resisting barriers at critical areas," Gillespie said.

* Western commercial nuclear facilities have gone 50 years without any negative health impacts on workers or the public. "Nuclear facilities are so environmentally benign they enable endangered species to live and thrive nearby. Osprey, peregrine falcons and bald eagles have found a home at nuclear power plants," he said.

* A 2004 economic study of nuclear generating stations in Salem County, N.J., revealed the facilities contributed almost $22 million to the economic output of the four counties surrounding the plants. The operation of the facilities generated more than 1,600 jobs in the surrounding counties. The jobs provided $154 million in salaries to workers in those counties. Their purchases totaled $413 million,

* Nuclear generated electricity supplies about 20 percent of America's energy and avoids almost 700 million metric tons of carbon dioxide per year in the U.S. "This figure is equivalent to the amount of reductions needed to achieve the 1990 levels agreed to in the United Nations Climate Change Treaty signed in Rio de Janiero in 1992," Gillespie noted.

The IEC will employ about 500 people in skilled technical and administrative jobs when the plant is operational and create 5,000 construction jobs during the approximately 5 years it will take to build the plant. Additional economic benefits include spin-off employment and a new market for crops and farm waste through the biofuels plant and the ability to bring new farmland into production with lower-cost electricity, the company believes.

Other benefits, company officials say, include lower power rates. Nuclear energy can be generated for as little as 2 cents a kilowatt, second only to hydro. The Northwest Power and Conservation Council last week predicted energy prices could be high in the coming years, particularly during short-term periods of high demand, such as the extremes of weather Idaho faces now.

"Reduced power rates will allow more farms to stay in business and allow more ag land to be cultivated -- there's no shortage of ag land, just a shortage of electricity and water," said Jay Clark, an attorney who currently farms the IEC site and is assisting with the effort to build it.

"Our power bill last year was more than a half-million dollars, most of it for pumping. If energy prices keep increasing, I and many other farmers won't be able to remain in business."

Gillespie said his company will work diligently with Elmore and Owyhee counties to address issues related to construction. Workers will have to be housed and transported, roads will have to be upgraded and local schools and public safety will need to be expanded.

Later this month, the company will install a weather-monitoring tower to collect a year's worth of data, as the NRC requires. The tower also will include a cell phone station, bringing cell service to an area with spotty service. The company has obtained full financing for the project.

Although not part of the initial application, the IEC also will have a biofuels plant, which would use excess reactor heat to sustain the biofuels process, making ethanol production possible for below a dollar a gallon, company officials said, compared to $2.50 currently. "Given that a gallon of gasoline wholesaled for $2.30 in Idaho as of mid-May, a 10 percent mixture of IEC ethanol could reduce retail gas prices in Idaho by about 13 cents a gallon," they contended.