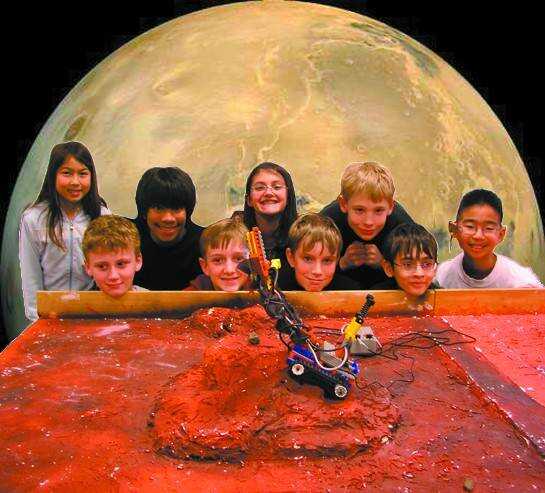 While the Mars rovers Opportunity and Spirit continue their exploration of the Red Planet, students in the Mountain Home School District's Gifted and Talent program are gearing up to be the next generation of engineers designing rovers.

Students in the fifth- and sixth-grade GT program in the district are getting ready to compete in NASA's Mars Rover contest, sponsored in Idaho by the University of Idaho.

In the next few weeks the students will take their designs for Mars rovers to regional competition (April 23 at Lowell Scott Middle School in Meridian), and if they win there, advance to the state competition next month at the Discovery Center in Boise.

Using a specific set of Lego building blocks, gears and remote-control devices, the students design and then build a rover.

The rovers are then tested in several categories. They must climb a steep hill, race through an obstacle course, pick up rocks and store them until they get back to the finish line, be light and speedy. In addition, the students compete in a "blind driving" test in which a rover operator is blindfolded and must manuever the rover based on oral instructions given by another student.

The students also have to keep a journal of the development of their rovers (showing among other things their time management), stay within budget, and design a poster and present a speech about their project.

"Frankly, you can't design one to meet all of the criteria and do well in every case," said GT instructor Rita Hoffman. "The kids learn you have to make trade-offs and do a lot of problem solving" from the original design concepts.

Last week, as the students were finishing up their projects for competition, the two teams Mountain Home will send were still tweaking their rovers. One rover team, for example, discovered it needed a bigger box to pick up and store rocks (duct tape came in handy at that point), but that resulted in the rover being underpowered and they had to change the gearing to make it still be able to move efficiently.

Mountain Home will sent two teams to regionals, the Martian Maniacs, and the Martian Aerospace Rover Specialists (MARS). Because there is a limit to the number of students on a team, and that exceeds the number of GT students, "they sort of have to try out for the teams," Hoffman said, and the GT program offers a "young engineering class," to help prepare them.

"It's a lot of fun," said Gina Hansen. "It helps your brain think more."

Julian Figueroa had another reason for wanting to take part. "I want to go to MIT, so this is good engineering, a great problem-solving experience."

And 15 years from now, these students will be just the right age to perhaps take part in the planned manned mission to Mars, a journey that will have begun on a small sand table in a classroom at West Elementary School.