Editors Notebook
Stephanie Root
Stephanie has been with the Mountain Home News since September of 2017. In May of 2018 she was promoted to Managing Editor of the Mountain Home News and our Mountain Home Patriot. She is married and a mom which explains a lot of her blogs, but is also passionate about her community. Being a ranch grown Idahoan you will see her rural nature infused in her writing. Her blog pieces are sometimes very whimsical and funny to read, but she is not shy about sharing the personal side of her world. Sometimes it is more local, state or national trending. I never really know where she is going to take me and the readers weekly. I hope you enjoy them as much as I do. Editors have available to them that one piece each week that is an opinion piece, all things Stephanie and not news, but something that I hope you look forward to . She is very open to her readers and never hesitate to reach out. Brenda M Fincher ~ Publisher
Recent posts
Archives

Be the nice kid 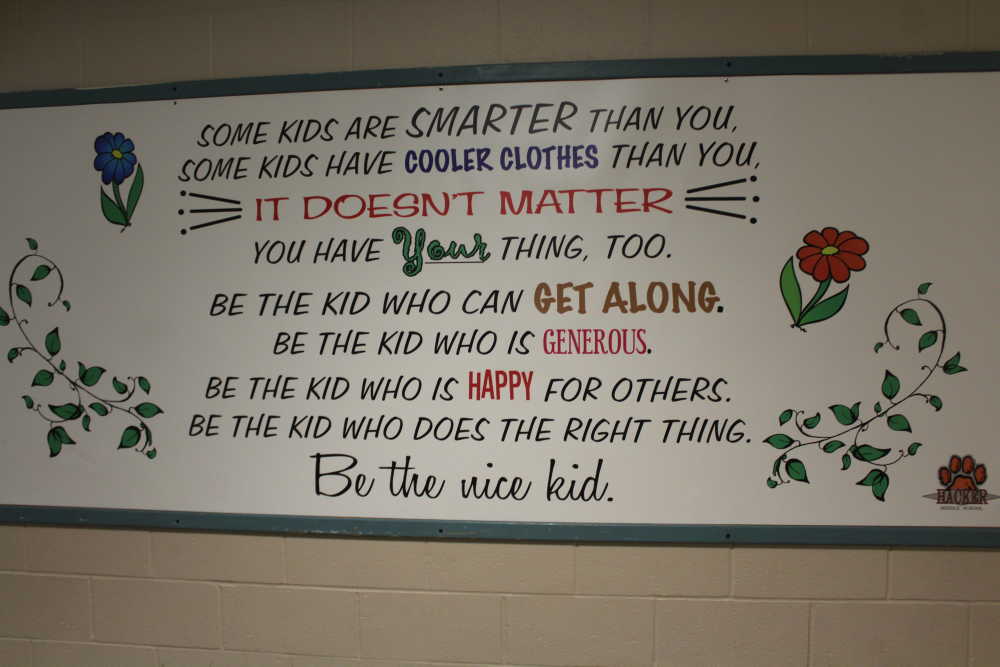 The Mural at Hacker Middle School that made this editor stop short.

While leaving Hacker Middle School last Friday after covering the science fair I stopped short in the hallway to take a picture of the wall. I then immediately showed it around the office to every co-worker who was there. Funny thing is, I got home from work, logged onto Facebook and one of my friends had shared a photo she had also taken of that mural while exiting the event.
On it was a simple, yet, powerful message:
Some kids are smarter than you. Some kids have cooler clothes than you. It doesn't matter. You have your thing too. Be the kid who can get along. Be the kid who is generous. Be the kid who is happy for others. Be the kid who does the right thing. Be the nice kid.
The words displayed on the mural were something beautiful to read and exactly the message that not only children, but most adults need to hear and take to heart: "be the nice kid."
At the end of last school year my son came home from the end of the year assembly with a "good neighbor award" for being just that, the nice kid and it was one of my proudest moments of motherhood so far.
Awards, drawings and pictures come and go on our fridge. Like any parent I eventually have to remove the old to make room for the new and our move to a new house at the beginning of the year was a good chance for a full fridge decoration purge. Everything was removed and either "retired" or put into a box for future trips down memory lane, but not the simple little elementary school achievement award sheet proclaiming him a good neighbor. It went right onto the new refrigerator.
I wasn't really surprised he had gotten such an award, nobody who knows him was. He is one of those people who just has a beautiful heart. He is empathetic and would never intentionally hurt someone's feelings. Though his dad and I would like to say it's all in the way he's been raised, it's not. He was just born that way and we were fortunate enough to not ruin it for him. But not all of us are born that way and perhaps, by the time he hits the halls of Hacker he may need this type of reminder as well, but boy I hope not. I hate the idea of that little guy ever becoming jaded or cynical.
The words on that wall go way beyond helping children with prepubescent angst over not having the cool clothes or being the star athlete. It is more then reminding children to not be bullies or to follow the golden rule. It's a reminder that all of us, including adults, should take to heart. It is something I am trying to take to heart.
It is easy to look at the lives of the people around us and be envious, especially in a day and age where everyone puts their best foot forward on social media. It is also easy to become a bitter and resentful to what looks like everyone else's perfect lives when we face trials and tribulations in our own.
It is almost as easy to say well I can't do the big things like donate money, organize an event, volunteer in the community or perform some other type of civic duty so why bother. Not everyone can make the big gesture or has the time to give to an organization, but everyone can do little things everyday to make life a little better for the people around them. In turn it makes our lives just a little better too.
Everyone has their strengths and their weaknesses in this life, nobody is perfect. Not every child is going to be valedictorian, a star athlete or an award winning writer. Some kids come from families that can't afford the latest fashions, especially since those change every couple of months and at some point in time almost every kid goes through the dreaded "awkward" phase. But every kid can be nice.
In our modern world where we receive news on command and can easily either a) find someone who agrees with whatever point we take or b) someone to argue incessantly with because of their opinions, makes feeling resentful or angry towards the world easy. It's natural to want to "give as good as you get." But in the end that just makes us feel worse about ourselves and it is simple enough (or in theory should be at least) to make mindful little changes to do the opposite.
Each of us can be happy for a peer’s success, can root for the underdog and can make sure to help others. It can be the little things in life, opening a door for a stranger, remembering to say please and thank you while rushing through your morning stop at the gas station or drive-thru for a cup of coffee or just smiling and saying hello when passing a stranger on the sidewalk.
You never know how those little things might brighten someone's day and your own. I don't know about you, but when I get a heartfelt thank you or a stranger on the street smiles at me and tells me to have a nice day it just makes me feel good.
So I challenge myself and all of you to remember we each have our own thing and it is better to be generous and happy for others then to be jealous or resentful. It is better to be the person who pulls out someone's chair then to pull a chair out from under someone. So let's all do the right thing, the cool thing and "be the nice kid."

To Hacker Middle School,
Thank you for sharing that message with our children, for teaching them to be nice people and for guiding them through those confusing pre-teen years.
Sincerely,
A mom in District 193

More from this blogger · Stephanie Root
Comments
View 1 comment
Note: The nature of the Internet makes it impractical for our staff to review every comment. Please note that those who post comments on this website may do so using a screen name, which may or may not reflect a website user's actual name. Readers should be careful not to assign comments to real people who may have names similar to screen names. Refrain from obscenity in your comments, and to keep discussions civil, don't say anything in a way your grandmother would be ashamed to read.
Respond to this blog