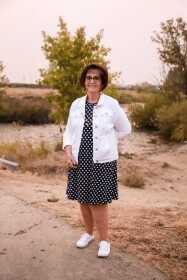 Willeva Jane Jackson Macy was born June 1st, 1948 in Baker, Oregon. After a courageous year-long battle with pancreatic cancer, Willeva peacefully passed away surrounded by those that loved her on June 20th, 2021 at her home. Willeva will be sadly missed and fondly remembered by all who knew and loved her.

Willeva graduated high school from Baker High school in 1966, she ultimately met her husband, Glen Macy. Glen and Willeva were married in 1970, they had their first child, David, in 1973 and their second child, Allyson, in 1976.

In 1980 Willeva and the family moved to Mountain Home, Idaho. Willeva began her love for working with children as a volunteer in her children’s classroom. Willeva eventually became the Librarian at North Elementary where she spent several years until her retirement in 2011.

Willeva fondness for children lead her to become heavily involved in Silver Sage Girl Scouts for many years. Glen and Willeva both enjoyed following their children’s sporting and dancing activities which also carried over to attending their children’s friends’ events as well.

Willeva enjoyed a full house which led to her and Glen becoming Foster Parents in the Casey Family Program for many years.

Following her retirement, Willeva spent many hours volunteering her time in her grandchildren’s, Taylor and Carter’s, classrooms. Willeva continued her mission to help children through reading, supporting, and simply being a constant cheerleader and ride giver to any child or friend in need.

Willeva spent hours volunteering with her best friend, Carol Dalton, at the Veteran’s Home. She became an active Member of the Forty and Eight organization. She was also a member of the American Legion Auxiliary for 15 years.

A Celebration of Life event will be held on August 14th, 2021, at 5:30 p.m. for all who knew Willeva. For location information, please contact Allyson Bates via Facebook or email (ally_bates@yahoo.com).