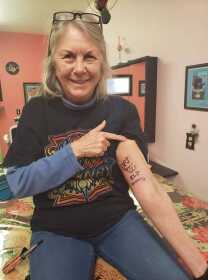 The fireball that was Kathryn (Kitt) Jones, age 67, left this earthly life at 6:28 pm on Friday, April 23, 2021, after a courageous battle with cancer. A loving wife, a caring mother, and a doting grandmother (and great-grandmother), Kitt was born in Maine but was raised in California. After stops in Florida, Arizona, and Alaska, she made Bruneau/Grand View, Idaho her home in 1986. After watching her sons graduate from high school and sending them out into the world, she and her husband, Deemer, settled in Glenn’s Ferry in 1994 and had been there since.

Whether it was hanging out at home with family, crocheting something she dreamt about the night before, or spending time at the Moose Hall fundraising for people in the community, Kitt developed a passion for life that shined through to all that knew her. She would share a crazy story of growing up a hippy girl in California or just listen to you while you told your own. If she cared about you, you knew you were loved.

Kitt is survived by her sons, Dennis (Cassandra) of Mountain Home, Idaho and Noel (Kennette), of Harrisburg, Oregon. Also surviving are her sisters, Cynthia Johnson of Arkoe, Missouri, and Pam Chytka of Weeki Wachee, Florida. She is also survived by 9 grandkids (Kristen, Devon, MacKenzie, Taylor, Cary, Julia, DeVon, Prestina, & Danyelle) and 5 great-grandchildren (Callie, Hunter, Coltyn, Ayden, & Levi). She was preceded in death by her husband, Deemer Jones, her mother, Marilyn Bruce, her father, Clarence Henderson, and her stepdad, William Bruce.

Her family would like to thank the Fain family, the Martell family, Mary & Paul, the Weens, the staff at St. Luke’s Medical Center in Boise, and anyone that helped Kitt during her battle.

A Celebration of her life will be held at the Moose Hall in Glenns Ferry at a later date. Cremation was under the care of Rost Funeral Home, McMurtrey Chapel.