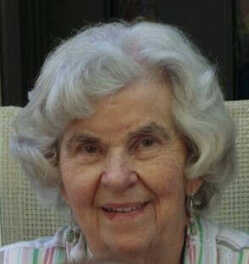 Patsy Fay Reynolds, of the Cottages of Meridian, died on April 18, 2021 of natural causes. A memorial service will be held at the Potter Funeral Chapel in Emmett on Friday, April 23 at 2:00 p.m. Patsy Adams was born in North Carolina on August 28, 1928 and relocated with her family to the lumber camps of Idaho at an early age during the Great Depression. When she was in third grade, the family relocated to Emmett, Idaho where she was raised and became a proud graduate of Emmett High School. She attended Boise Junior College before transferring to the University of Idaho to further her education in the field of nutrition. There she rekindled a romance with a high school friend, Don Reynolds, and they were married a year later.

Her early years were spent as a Navy aviator's wife and home maker. The family eventually settled in Mountain Home where Don established a dental practice. Patsy was fully invested as a homemaker for many years, raising four children while still finding the time and energy to work as a bookkeeper in the dental practice. Patsy was active in two churches: The Mountain Home Congregational Church and later the McCall Community Congregational Church. Patsy was known for her love of wildflowers. She and her husband and children spent many hours walking through the mountains and deserts of Idaho, picking flowers which were laboriously pressed, dried and placed on cards. Friends and family were always greeted with a handful of these cards and their beauty was appreciated by all. Even in her later years, her humor and was wit was evident. She was a kind and generous person who worked hard to pass these qualities to her children. One of her favorite sayings...” It’s nice to be important, but more important to be nice.” was heard many times in the Reynolds household. She was the last of her generation to pass in the family. Patsy is survived by her four children: Anne Reynolds of Boise, Merry Kim Mues (Lloyd) of Moscow, Eric Guy Reynolds of Boise and Keith Reynolds (Laura) of Garden City. She had five grandchildren and nine great grandchildren that she loved and treasured. In lieu of flowers, donations can be made in Patsy's memory to McCall Community Congregational Church, P.O. Box 762, McCall Idaho 83638.