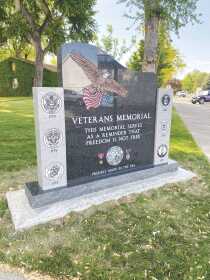 Edited: This article has been edited to reflect that there was no fly over and that Taps was not played by the Honor Guard.

On the Fourth of July local dignitaries gathered in front of the Elmore County Courthouse for the official unveiling of the Veteran’s Memorial Monument. 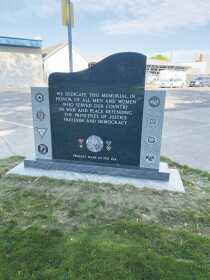 Speakers included Mountain Home native, Charles Abrahamson who emcee’d the event and is a former member of the Marine Corps, former State Commander of the American Legion and currently Idaho’s Department Adjutant of the American Legion; Col. Richard Goodman, Wing Commander of the 366th Fighter Wing from Mountain Home Air Force Base; Elmore County Commissioner Bud Corbus; Del Shaw - Korean and Vietnam War Veteran and Mountain Home Mayor Rich Sykes. Mayor Sykes discussed a proclamation that will soon be placed in front of President Trump to designate a state funeral for the last Medal of Honor recipient from World War II, here in Mountain Home, as a final salute to the 16 million men and women of the ‘Greatest Generation’ who served in our armed forces from 1941 to 1945.

“We have funded a monument to represent the freedom that we have today and memorialize the fact that we are a free country and we respect our veterans highly, with everything that they have done for us we are honored today to have those veterans here and have them speak in a country that is free because of them,” Elmore County Commissioner Bud Corbus said.

During the ceremony the Honor Guard was on hand to play during the raising of the flag.