A reader shares her life story 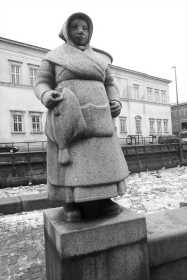 To my friends in Mountain Home, Idaho

I have lived in Mountain Home since 1971, at which time, my husband, Burdell, retired from the Air Force. Many of you remember me as being your friendly Avon lady for more than 30 years.

I was born in 1933 in Copenhagen, Denmark, and was baptized and confirmed in the Danish Lutheran Church. Growing up in Girl Scouts, we attended church often. My mother’s name was Maggi Jensina Wilhemina Jensen. My grandmother, Wilhemina, was born in Germany. My father’s name was George Christiansen. He was a butcher or “slagter” in Danish. I met my husband when he came for the week-end on a plane hop to Copenhagen.

My mother and grandmother were both fishwives on Gammel Strand in downtown Copenhagen. This market was located on the Baltic Sea where fish of all kinds where caught and sold. Very early each morning, my mother and grandmother would go to buy fish from the fishermen. Then, they would weigh the fish and sell them until mid-day in the outdoor market. I especially remember eating eel, flounder, and herring because mom would bring home for dinner what she didn’t sell earlier in the day.

I remember the second world war because I was only 10 years old when it began. My family and I knew a Jewish family living across the street. They had a candle burning in the window. The family escaped to Sweden in a boat at night, so no one would see them. They returned home after the war.

I remember German soldiers on each corner when I walked to school. It was very scary. My girlfriends and I would lock arms together to be brave as we walked. During this time, I had an appendix attack while in the street. My mom had to call a taxi to take me to the hospital. I was in the hospital for a week. The only person to come see me one time in the hospital was my Aunt Soiveg. She wasn’t afraid of the Germans.

A British plane by accident bombed a Catholic School and everyone was killed. Prince Christian X rode a horse each day in the streets of Copenhagen during the war. He was proud of the people of the Danish people.

I have been fortunate to give birth to four children, Gregory, Jeffery, Michael, and Tina. In the early days, we stayed in the hospital for one week after the baby was born. We had to watch the babies diapers ourselves while in the hospital. I also am very happy to have three grandchildren, Adam, Joe, and Adela.

I am very proud to belong the First Congregational Church, the Order of Eastern Star, and the Daughters of the Nile in Boise.

It’s fun to share my life with others. We are blessed to live in America.