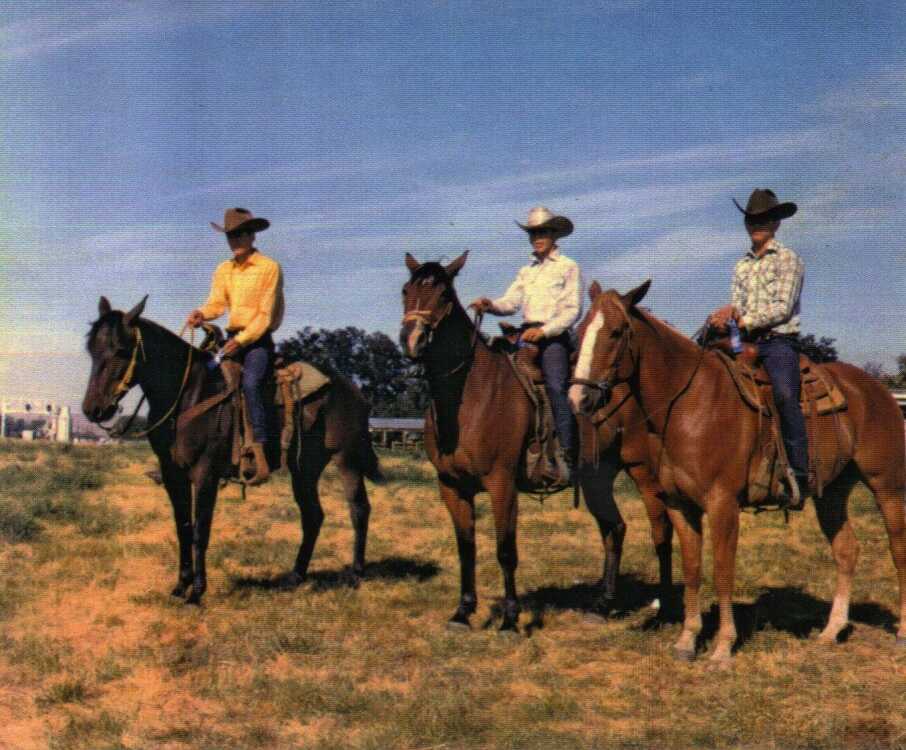 My oldest brother Rick was a horse whisperer. His horse "Brownie" was trained to obey hand signals and a few unique commands.

Brownie was typically a "one" man horse in his younger years. Not as muscular or as powerful as his relative Johnny Hawk; Brownie, nonetheless, was a wonder to watch. Rick would put him through his moves in our round corral. He didn't need the promise of a grain bucket or any type of sharp commands.

All of my brothers had a hand in training horses at some point during their growing up years. With a couple exceptions, they stuck with one horse for their daily riding.

"Rattle Snake Joe" was my brother Jody's horse. His real name was Rebel Duster and came out of the Star Duster Line. He was given this nickname by my dad when he was bitten on the nose by a rattlesnake in his younger years while grazing.

All of the hide peeled off of his face as he recuperated from the trauma of a snake bite. A beautiful horse with great racing speed; there was at one time conversation to put him in the races. The decision was left to Jody, who decided that he would rather just enjoy his horse.

Rattle Snake Joe didn't like anyone but Jody to ride him. He "allowed" dad to ride him on certain occasions, but not all that happily. Bev used him during her own 4H years and Rodeo Queen days after Jody graduated from high school and left home.

Old Buttons was one of the matriarchs of our horse family. She came off of the King Ranch in Texas. A very powerful horse in her own right, she was able to stop on a dime when she was used for roping. She lived to be the grand old age of 31 year old.

Buttons Image was Old Button's daughter. She looked exactly like her mother with the exception of having a little more white on her face. Talk about a powerhouse! Buttons Image was a force to be reckoned with on all fronts. She had speed and muscle. Woe be to the person who denied her a bucket of grain, she might just walk over the top of you to get a single bite of grain or hay.

She was pretty much unfazed by any type of trauma as long as you allowed her food. She was in two accidents during her horse years, once on a camping trip and another time en-route to going hunting. Although, the 2nd accident left her a little trailer shy, you could always tempt her with a handful of grain.

Horses and their individual personalities are interesting to watch with the different ways that they respond to a different riders. Because I was a more timid rider, I wasn't a good candidate for trying out high-spirited horses. But everyone else in my family seemed to be naturals when it came to those types of challenges.

Being "horse poor" as my dad described us, meant that we had a multitude of choices in the way of prime quarter-horse stock. But they were more than just good "blood-lines" They were a part of our family.

Trained for all types of ranch work, Dad used to say that we had some of the best horses in the county. And it was true. Our city cousins envied us because we could ride anytime that we wanted to. Little did they know, ranch-life was hard work too.

Growing up with horses and cows was a character-building experience. We were able to learn so much about ourselves because of those days of windy springs and hot summers of herding cows; 4H and trail-riding.

As I have mentioned before, I was not as confident rider as my siblings. I would have preferred to stay home and be a house-plant. But I was always able to admire the example of courage and confidence that Dad and my siblings displayed.

One last memory of my dad's words of instructions to us kids growing up. "Don't Run Those Horses on the Way Home!".

Comments
View 1 comment
Note: The nature of the Internet makes it impractical for our staff to review every comment. Please note that those who post comments on this website may do so using a screen name, which may or may not reflect a website user's actual name. Readers should be careful not to assign comments to real people who may have names similar to screen names. Refrain from obscenity in your comments, and to keep discussions civil, don't say anything in a way your grandmother would be ashamed to read.
Respond to this blog