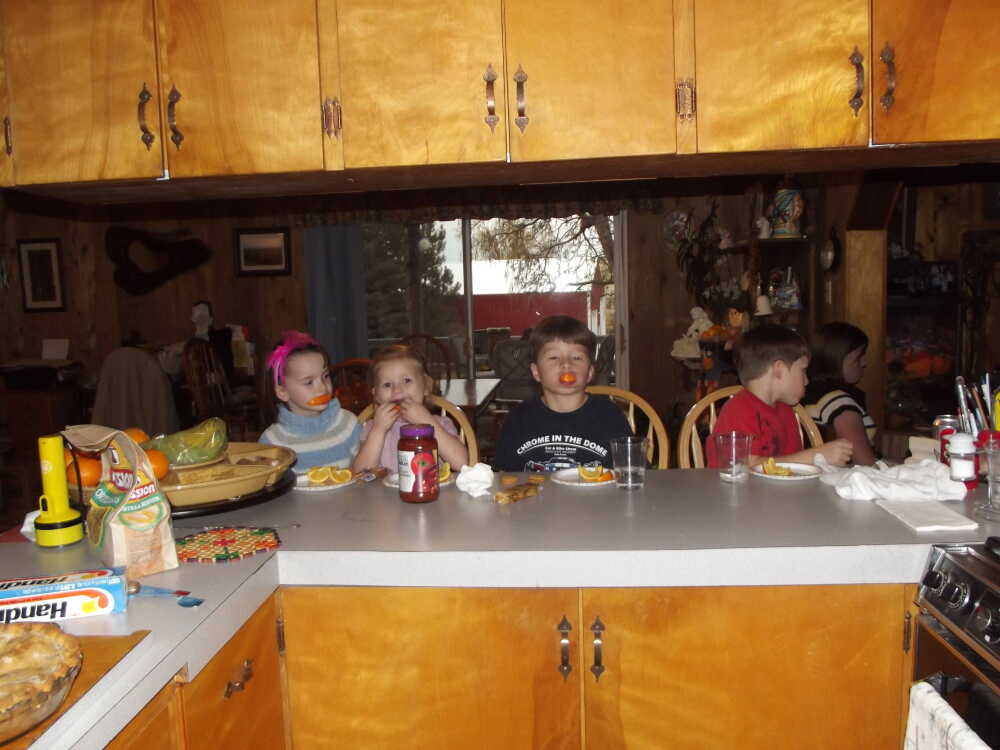 Mom's kitchen counter. Nothing much has changed except the faces.

Mom didn't have a set recipe for her bread. She just put in a little of this and a little of that. Bread-making days meant a batch of biscuits or a warm loaf of bread was slathered with butter and honey and eaten shortly after coming out of the oven.

Steve Parke used to claim that he could smell the bread baking at his house a mile or two away. He must have been telling the truth, because he always showed up when a new batch was made.

Long before they were fashionable, Mom had custom made cupboards and a flour bin that could hold 50# of flour. There was also a set of built-in drawers and the 3rd one down was the designated bread drawer.

My niece Marissa has taken over the role of bread-baking and to be quite honest, she comes pretty close to matching Mom's bread. At Thanksgiving, she brings the homemade rolls for dinner and gives Mom several loaves of bread to freeze for later use.

Years ago, I read that the best perfume that a bride could wear was the smell of baking bread. I realize that is old-fashioned these days. But when you think about it, it make sense. Nothing is more welcoming that the smell of freshly baked bread. Just imagine being a newlywed and coming home to your bride's welcoming gift of food.

Dinner time at our house included our dad teasing our mother about her cooking, but I don't believe that he ever joked about her bread.

Dad was also the ring-leader of mischief at the dinner table. Sliced bread might be served the conventional way by genteelly passing the serving dish. Or if you seemed to be in a hurry to eat, a piece might come flying across the table. I assure you that this did not happen all of the time; we did have some manners when there was company present.

Mmmmm, I am pretty sure that all five of us kids will never forget how great our house smelled on bread making days. It was a toss-up from week to week; if we were going to have biscuits or cinnamon rolls for an extra treat. The bread drawer was never empty growing up. It was, and continues to be a constant reminder of our mother's love for her family.