He Wore A White Hat. 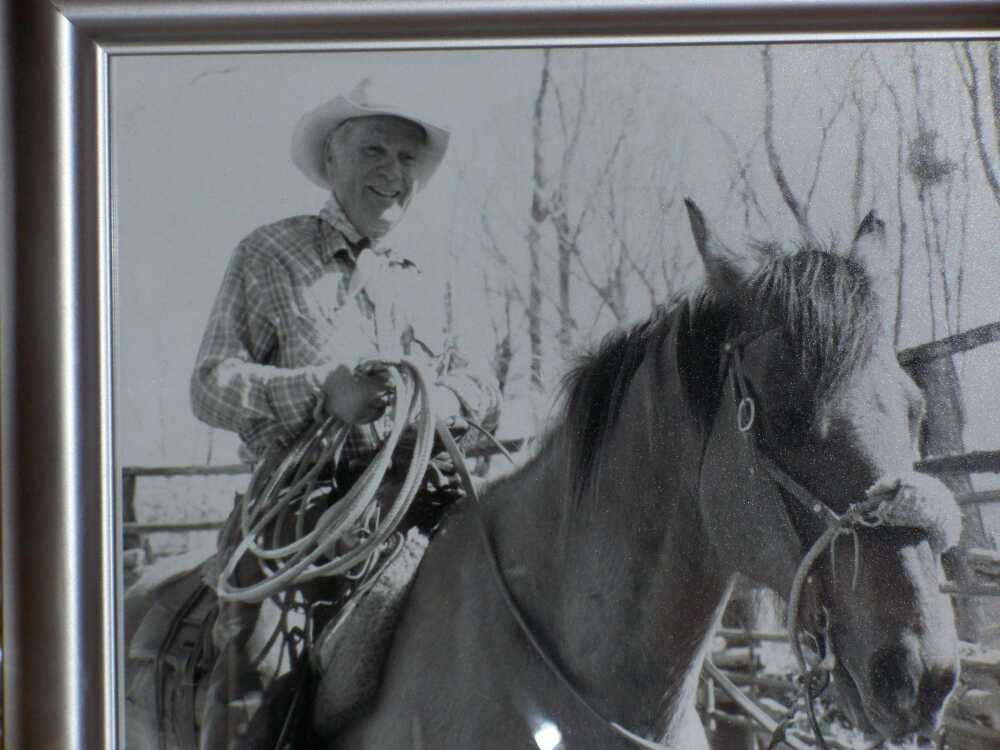 My Dad, one of the White Hats that has gone on before us. Sept 13th would have been Mom and Dad's 60th Wedding Anniversary.

Back in the good Old Days of Movies and TV shows, the Good Guy Always wore a White Hat and the Bad Guy wore a black hat.

We always knew that the White Hats would win. The Truth was on their side. The Black Hats were sent to jail without bloodshed and everyone cheered at the end.

I was answering a question on another person's blog and it occurred to me that we no longer have that luxury of defining good and bad. Hollywood quit making real heroes a long time ago and started portraying the Anti-Hero in the late 60's and 70's.

The Anti-Hero would get the job done, but he wasn't always a sympathetic character in the movie. He might shock you with the language that came out of his mouth and his gun did not stop the enemy in its tracks, but prolonged the agony by a bloody gunfight.

Roy Rogers lived by the White Hat creed. He determined never to be a poor example to children or his audience. Red Skelton made the same commitment to his fans also. I could name countless other actors and actresses, who followed the honor code of conduct in both their professional lives and their private ones too.

The Black Hats in the old days recognized authority when they were challenged. Their evil plots and schemes were exposed and their greed was rewarded with a fitting punishment.

Now, we all know that in the real world, even back then, that some people were evil and did bad things under the pretense of being a good guy. Greed is an age-old vice that has endured for centuries.

These days, the White Hats are not as popular as Roy Rogers. They stand up for what is right and are ridiculed or condemned. Their words are twisted and taken out of context. Their integrity is questioned and you just have to wonder what makes them go on with the message that they need to give or the task that they have been called to do.

I think that is is because of their inner strength and a belief system that is not of this world. But I will go even a step farther and say that the message is not something that you can appoint yourself to do on your own, it is a calling that can take on a huge responsibility.

We see many of those self-appointed messengers vying for airspace and camera time. They live to keep things stirred up and often use the cache of their celebrity or status to proclaim these theories to millions of viewers.

Now, Miss Kitty-Lover may come out of the wood works to say that I am being preachy again. But the point that I am trying to make is that there was a time when the enemy was easily recognizable to everyone.

Our wars were fought with a clear vision of what the outcome was going to be. We rooted for the vanquishing of those who had stolen liberties from the oppressed or overtook countries with force and power.

Our enemy is not the person in the black hat, but a person who makes us believe that evil is good and good is evil. That covers a lot of people in all walks of life.

Christianity is considered a black hat in most circles and they are perceived to be intolerant and bigoted. However, if push comes to shove, most Christians will be the first in line to help you up when you fall. They will gladly hand over their last dollar when a need is expressed and the plate is passed.

The Black Hats in Christianity are those who take from the oppressed their last dollar and live amply off of the proceeds of those donations while their members live in poverty. They project a shiny image on TV, but their home lives are a mess.

The White Hats in Christianity walk a different path. Most of them quietly go about their business. They feed the hungry and clothe the naked. They bind up the wounds of those who have come in from the cold and battlefield.

I don't know if I could clearly define who is wearing what color hat in the world today. Some of us have White Hats with a few mud spots on them. Some of wear Black Hats and pretend that they are White. And all of us have a long ways to go before we can say that we live a blameless life.

So here is my last theory on the good and the bad. You will always find black hats in every crowd. They may not stand out like they used to, but they are there, whispering contentious things, to the people on the right and to people on the left.

The White Hats may have taken a few tumbles off of the horse over the years, but they keep getting back on. They sit tall in the saddle and endeavor to keep their horse traveling on the right trail. The trail may be rough and filled with fallen trees, undergrowth and critters, but this will not deter the rider, if his goal is to reach the Home Ranch.

The Home Ranch is what should beckon us on in times of deep darkness. If you find yourself uncertain that you are going in the right direction be assured that Someone has left a light burning in the window to show you the way.

How we reach the Home Ranch will depend on our choices. The light burns brightly for ALL OF US- regardless of the color your hat; because of His desire for Everyone to know the joys of the Home Ranch.

Roy Rogers wore a white hat, not only because he was a good guy in the movies, but because, he stood for something in his private life. He would keep in mind who his audience was and stay true to the Code of the Cowboy.

And for a parting thought from the Cowboy who wore a White Hat. Happy Trails to You, Until we meet again.