Branding, Birthdays and Egg Hunts-Oh My! 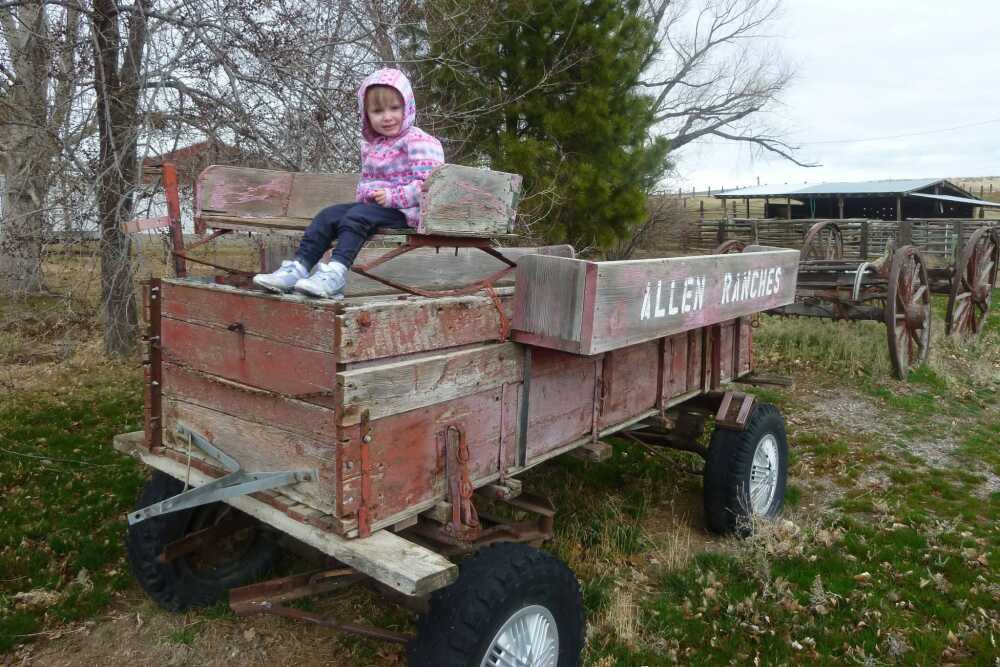 No pics yet for branding day. This is Deborah one of my little cousins who came to visit Mom earlier in the year.

The best part of my trip to Idaho happened on Saturday.

I hadn't been to a branding since 1986, when Dad was charged by a cow and broke his ribs. One of the kids came up to tell Mom that Papa had hurt himself. Expecting a cut on his forehead or something else minor, Mom didn't panic. Dad was kinda accident prone on all special occasions.

However, it soon became apparent that even though he had the traditional cut on his forehead, something else was really wrong. Covered in mud and manure, my brothers helped him up to the house. No, he didn't want an ambulance, and an even more emphatic "No!" to the notion that he would show up in the emergency room covered in the therapeutic and aromatic mix of mud and manure.

Standing behind the door of the pick-up, he allowed Rick to wash him off with a bowl of water and help him into a clean shirt. We later found out that he had broken his ribs.

What was so touching about that year was that even though he was in a great deal of pain, he didn't bow out from his tradition of fixing my mother a cup of coffee and taking it to her bedside.

I think that we all missed Dad on Branding Day. He would have loved all the kids running around and I am pretty sure that his smile would have been big and proud for all the "helpers" big and small.

But Branding Day was also the day that we celebrated our Mom's 80th Birthday and had an Easter Egg Hunt in the horse pasture.

Mom wasn't feeling all that well on Saturday, but managed to take her place of honor for the 2nd part of the day. Our dinner was potluck and there were huge platters of smoked turkey, roast beef and ham and salads, casseroles and desserts. No one went away hungry, I can promise you that!

Three of the oldest girls hid the plastic eggs in the pasture. There were about 15 or more kids that waited impatiently behind the starting line with their plastic bags. And off they went! There were eggs in trees, on the fence poles and hiding in little tufts of grass. Even the tiniest participant was savvy enough not to mistake a horse apple for an Easter Egg.

Our weather was so nice and all of us enjoyed the outdoors. I can remember more than a few Easter Egg hunts with a cold March wind and cloudy skies.

Sigh! It was a wonderful day for all. The only thing missing was my own family to enjoy this mini-family reunion and a few of the "old-timers who have gone on to greener and manure free pastures.

Looking back, I can still hear the joyful laughter as we gathered for after a hard mornings work. Oh what we would all give for one last hug to those loved ones who had graced our home for so many years.

Our Uncle Tom, who was a gentlemanly cowboy with a quiet voice. The three sisters; Edna, Elva and Chloe, who always arrived in their Sunday Best.

Uncle Frank, with his raspy voice and his aversion to beards and mustaches. He probably would be pretty popular with those individuals who needed to give a cat away because to him, the only reason to grow facial hair was because your cat had died.

But most of all, our Dad, who delighted in the "tall tale," lived to tease and enjoyed being a cowboy on Branding Day.