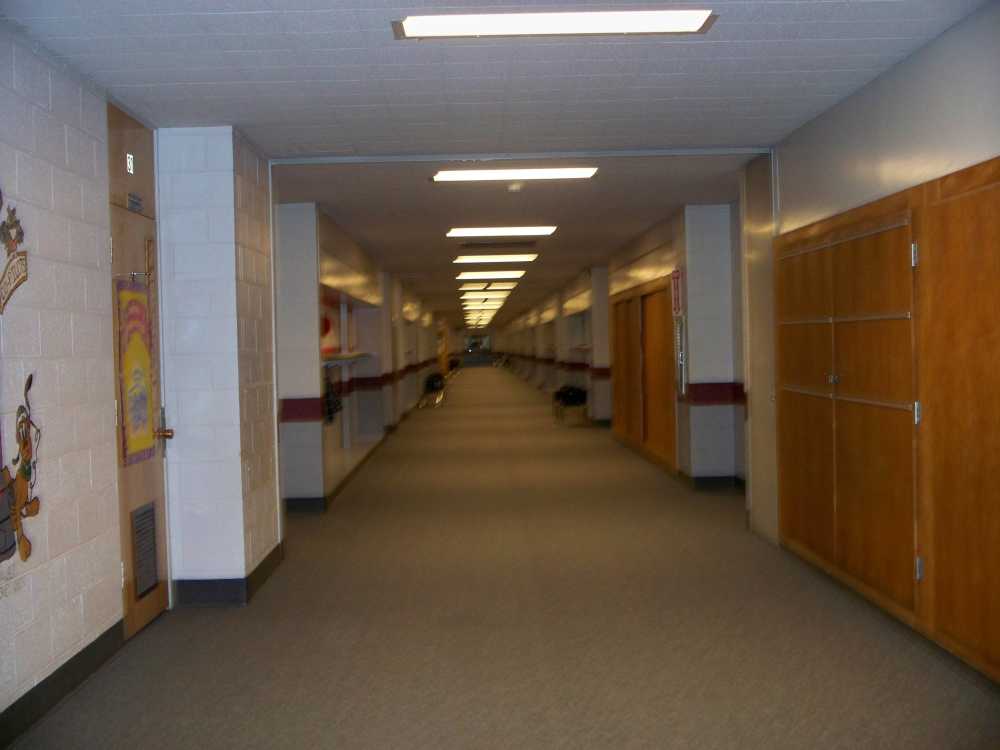 The Elementary side where the children behaved.

Getting into the lunch line at school started out to be a civilized affair. We all know that elementary teachers used to put the fear of God into their students. Each class was orderly and respectful.

No One disobeyed the clearly understood social rules. No Cuts! (unless the person in front of you gave permission). No Running! That was a given, because Mr. Watson, the principal was an authority figure. He didn't have to say much or even do anything. Just like when a traffic cop is following your car, you automatically slow down. Even if you were not speeding.

Our Junior High was across town at the old Glenns Ferry High School. Every day, the 7th and 8th Graders filled two buses to go back over to the main school and have lunch. Junior High was a dangerous time for us quiet and nerdy kids.

In High School, all the rules were broken as kids made a mad dash from the classrooms to the hallways. Woe be unto those who just happened to be waiting just outside the door or crossed the line of rush hour traffic.

The lunch room was quite a ways from the High School Wing and of course, there was that silly, no-running rule suggestion that no one ever paid attention too.

The 70's was the era for big shoes, elephant-bell pants and leisure suits. Try running/walking in a pair of platform shoes sometime. My legs were quite short but I perfected a run-walk that earned me the nickname "Motor-Mouse."

Mrs. Craig demanded civility in her lunch room. It was a job that she did quite well without ever having to get up from her chair at the ticket/cash table. In fact, if we had a Mrs. Craig running the TSA or any other Security operation, there would not be any terrorists.

She was of the old school opinion that getting your bluff in with kids was the best way to keep order in her domain. My mom would write a check once a month for lunch tickets. It was my job to go down and purchase said lunch tickets for all of us kids.

Her records were alway accurate to the penny and she knew all the kids by name. There was no sneaking past her to get a free lunch. Her hand would snake out and she would ask you fiercely if you had paid or where was your lunch ticket?

I do believe that she was also the only person who called my brother Buddy by his given name, Stephen. The first time she asked me about a Stephen, I had to take a minute to figure out who he was. No one else called him by that name.

Although, she seemed gruff, she was a very kind lady who took her responsibilities seriously. Mrs. Craig was our friend Lucille's grandma and we kids were able to see her in an entirely different light when she was not at work.

The Lunch Ladies were a dedicated group of women. They provided some very interesting meals as we grew up. Some of their selections were stellar in flavor and others were very strange.

For instance, their cinnamon rolls and orange rolls were wonderful! I loved the bread that they made too. Most of us can remember the great desserts and fruit cups too.

However, it was the main dishes that sometimes had us puzzled. No one has ever been too excited about their tuna loaf. It was a work of modern art, if you get my meaning.

Pizza day was not your typical commercial pizza, but a cookie sheet of carefully cut squares topped with cheese that was not Italian and for the meat, sliced bits of hotdogs. We may of had hamburger, but it is the hotdogs slices that stand out in my memories.

Chili day were always scheduled on sports days, like track meets or football games. I never learned to like their canned peas either or their spinach.

School Lunches were a bargain back then. For 25 cents, you could dine in style complete with a drink!

Mrs. Craig; Martha Callison, Elsie Carnahan, Margaret Howell, Ruth Solosabal, and Eva Farris are gone now. Each of them had great talents in the kitchen. They greeted us with welcoming smiles 5 days a week. Alice Finlayson Allred is still with us and I am sure that I have left out some other names of ladies who served over the years.

Lunch Ladies are special people. They provide not only nutritious and character building food, but serve it with some awesome smiles to boot.

Small schools are special places. No one gets lost in the crowd because there is always someone out there that helps a child make a memory as they grow up. No one ever died from eating a strange looking tuna loaf. And certainly, chili day was considered the track team's secret weapon at track meets.

Please feel free to comment on your memories of school lunches and Lunch Ladies. Even if you liked the tuna loaf!