When You Hear The Coyote Yip-Three Times 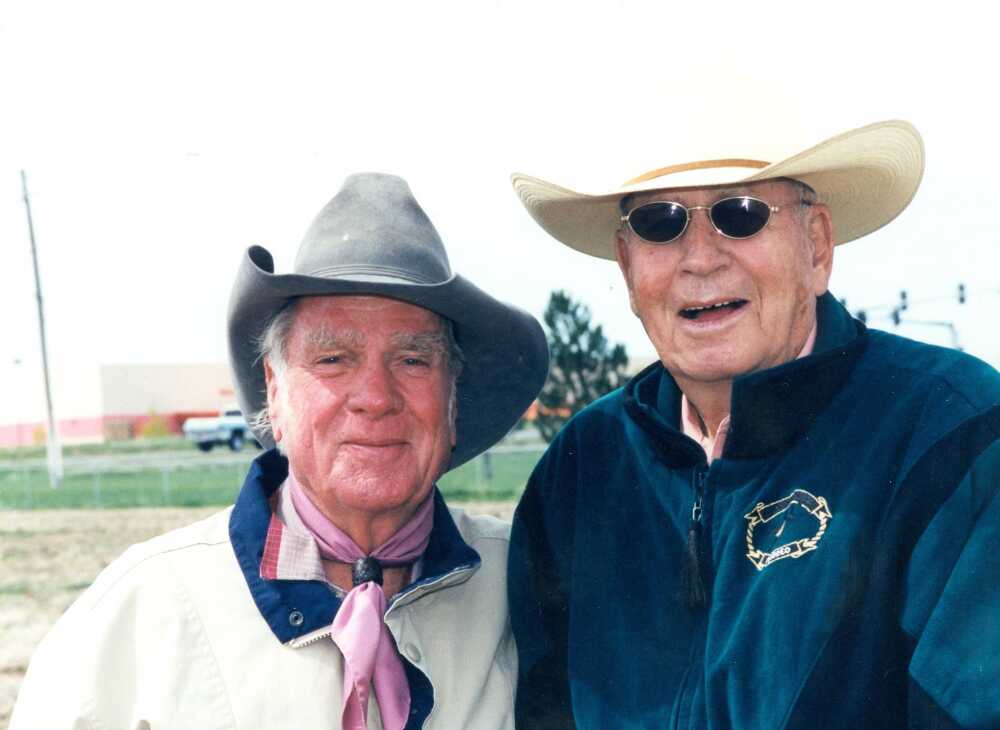 Dad and Tom Hall, who were both known to spin a few "Tall Tales" in their time.

Once upon a time, there a cowboy whose name was Just Bill who loved to spook the Greenhorns around the campfire on Halloween.

He had a great tale ready for this momentous occasion. His Five Greenhorns had ridden all day and were saddle-sore, dirty and tired and were ripe for a good old-fashioned leg-pullin'.

After supper, Just Bill told about a great big bird that only came around every 100 years or so. And as he recalled, the hundred years might well be this Halloween. The Bird was called a Scabby-Feathered Harpy. He described with great relish the Harpy's wing-span was about the size three horses standing rump to rump and was known to swoop down on sleeping cowboys and take their cowboy hats. If you happened to be a little feller; the Harpy would take you too.

Just Bill allowed that it was mostly cowboy hats that the Harpy wanted, but Darn, if a cowboy would get all stubborn and refuse to let go of his 2nd most prized possession.

One of the Greenhorns asked a little cautiously if the Harpy had ever been seen on this particular desert. Just Bill stroked his chin and said with great reluctance that his grand-pappy had seen one as a young boy.

So, all of them asked how would you know if one of these Harpy's was nearby?

Just Bill got a faraway look in his eye and said slowly, "When You Hear The Coyote Yip-Three Times, Take Cover."

Soon, it was bedtime and the Greenhorns got out their bedrolls. They had decided amongst themselves that one of them should take watch while the others slept. That way, they would be warned of an impending attack.

The fire died down to a few embers and Just Bill could be heard sawing logs nearby. The Greenhorns were so tired that they all fell asleep quickly in spite of their prior resolve to keep one eye open.

On the third yip, all five Greenhorns had sat up with their hearts pounding heavily in their chests. I imagine that a couple of them wished that they had visited the outhouse before going to bed.

Just Bill was chuckling silently to himself, that coyote yipping only served to help verify his "Tall Tale" credentials.

Imagine Just Bill's Surprise and Terror as a Huge Bird came Swooping down and flew straight at him!

Just Bill Forgot to Be A Cowboy and took off running. The first sagebrush that he tried to climb wouldn't hold his weight.

Desperately, he headed for the largest rock to hide behind. All the while, he was hooting and hollering as though the Devil himself was riding his coattails.

Pandemonium broke out then. The horses broke their traces and took off running into the darkness of the desert. I think that a couple of the Greenhorns were able to outrun them by a mile.

The other three Greenhorns were running around the camp frantically looking for Just Bill. And screaming like girls in the process.

Where was Just Bill? And why had he taken off in such a hurry? Didn't he know that he was in charge of the Greenhorn's safety? Had he refused to give up his cowboy hat and was swept up by the infamous Scaptumpious Harpy?

All night, the three remaining Greenhorns sat huddled together imagining that every sound was a Harpy coming to take not only their cowboy hats but couple of the "smaller fellers" too. They thought that they could hear Just Bill's tortured screams in the distance as the Harpy tore him up bit by bit.

As the morning came, the other two Greenhorns came back to camp with a couple horses in tow. They claimed that a man who looked like Just Bill ran past them about five miles down the road. Of Course, they said, "It couldn't have been him, could it?

After waiting for a couple hours more, the Greenhorns broke camp and began the journey back to the ranch, believing that Just Bill had been taken by the Harpy.

As soon as the ranch came into view, the owner of the ranch rode up to see why they were all walking instead of riding their horses.

The Five Greenhorns told their harrowing tale about Just Bill being eaten by the Scabby Feathered Harpy. All because he would not give up his cowboy hat.

The owner of the ranch began to laugh. Ha! Ha! Ha!,"Just Bill finally got a taste of his own medicine. He's probably hiding behind a rock. I will ride out and see if I can spot him any where.

But alas, this tall tale does not have a happy ending. Not A Trace of Just Bill was Ever Found. The Five Greenhorns went home convinced that The Harpy had taken Just Bill to the great beyond.

After days of searching the desert, the rancher was only able to find half of Just Bill's Cowboy Hat, about a mile from the campsite.

So, Just Bill became his own Tall Tale. Three generations of Cowboys speculated as to his fate around their campfires. They carefully stowed their cowboy hats in their saddle bags at bedtime.

As for the Scabby-Feathered Harpy; Well, you will have to wait another 100 years or so to see if Just Bill was telling the truth.