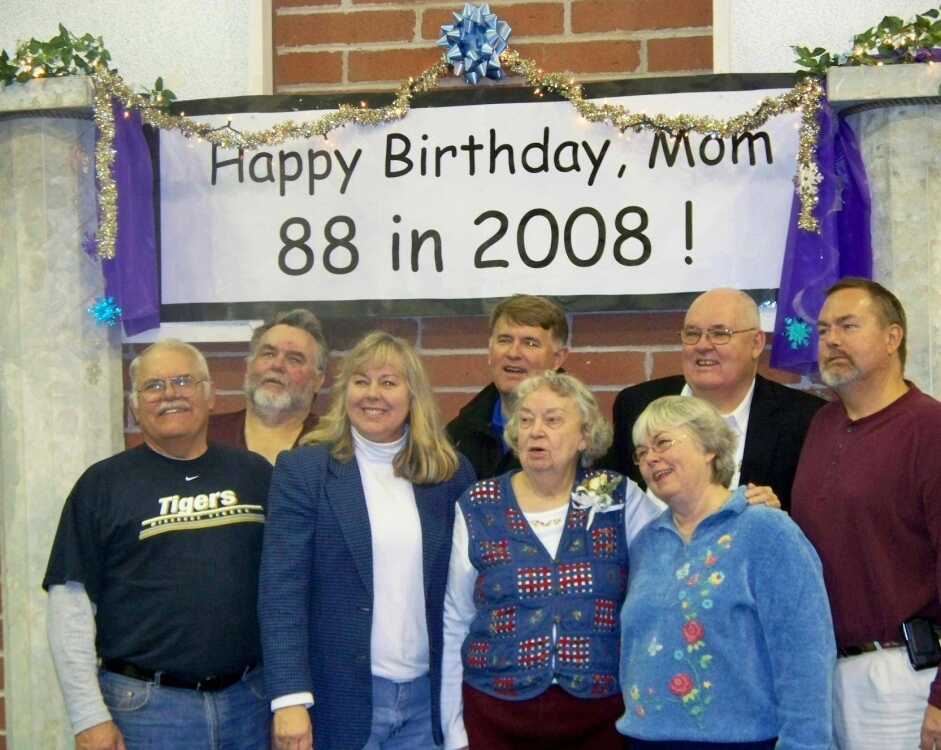 David's Family in 2008 celebrating their Mom's birthday. Only their brother Jerry was absent.

The Smothers Brothers used that line in some of their comedy routines. Coming from a large family, I know the feeling.

Now my sister Bev would say that I was the spoiled one because I never got the hardest spanking. My brothers would say that Buddy was the favorite of the three because they always had to watch out for him.

Family dynamics and pecking orders are always tricky things. We probably don't notice favoritism until we get to our pre-teen years.

Moms are the janitors who don't get much credit. You notice that you have a Mom growing up, but you don't really appreciate how they are able to do their jobs without expection of a praise or personal gratification.

Whether you had a Mom who blessed or cursed you as you were growing up; they taught you something about life. Will we choose to thrive or wither because of our childhoods?

My friend, Susan had a mother who cursed her. But Susan grew up to be one of the most loving and vivacious woman that I have ever known. She loved her children fiercely. Her prayers were much availing for all of our children.

Susan was a Mom, who blessed her children. She had a special repoire with other people's kids too. Her sense of humor and can-do attitude influenced an entire generation of young adults.

As a Mom, I know that at the age of 19, I had no clue of what was ahead of me. I am pretty sure that my own children would say that I was a mixed blessing to them. And that there were a few years that I was a curse.

Mercifully, most parents get the adorable baby first and the terrible years later on when you are still trying to recover from sleep deprivation.

I don't know any Moms that were like June Cleaver. She was a calm, well-dressed woman, who always had an answer handy for any childhood angst. Obviously, the Beaver never threw up on her clean dress or mortified her in front of a crowd of people by having a temper tantrum.

Motherhood can be messy, chaotic and exhausting. But just when you want to throw in the towel; a little Angel comes up to you and says some magical words. "I Love You Mommy, Lots and Lots.

Keep in mind that the ultimate reward of Motherhood Are Granchildren. They elevate your status from Janitor to Grandma!

Happy Mother's Day Everyone. If you are able, hug your Mom and make her feel special. Pay it forward to Motherhood by adopting a "Mom" if your own has passed away.