Take One Home to Your Mother-In-Law 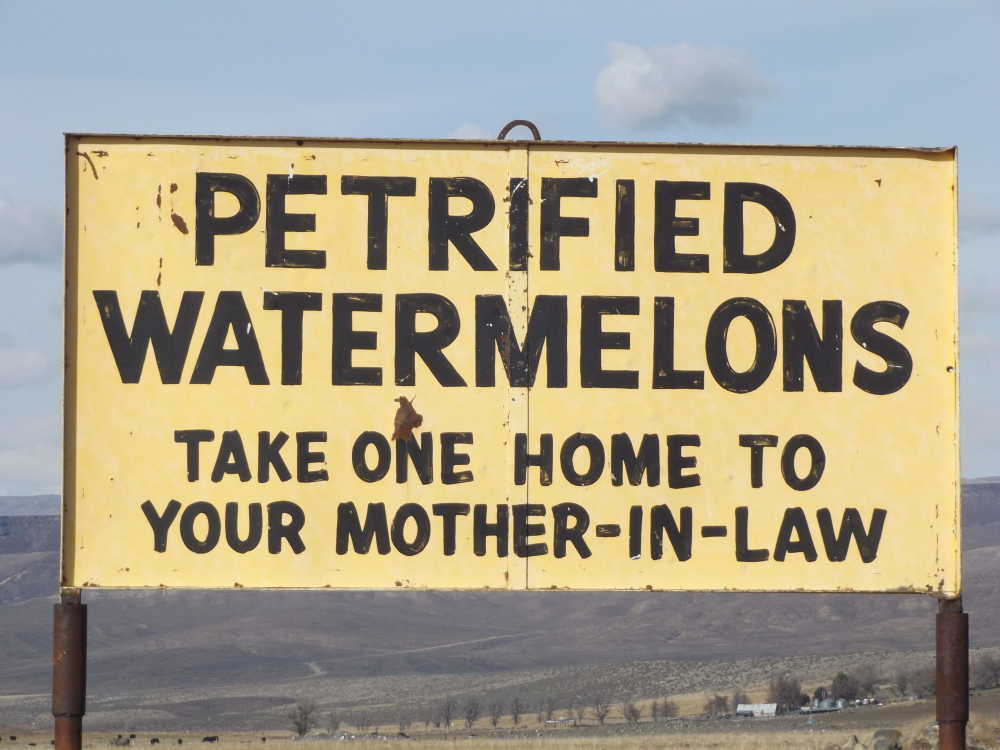 I took another picture in November when I was out there.

Today, I was thinking about road signs and how they were a part of our landscape growing up. On Old Highway 30, you can still find a few rusted signs that made our trip to town a more interesting adventure.

If we were heading to King Hill, we always passed the Petrified Watermelons-Take One Home to Your Mother-in-Law, sign. It is still there today, thanks to the Kast family from the 101 Ranch.

If we headed to Bliss or Gooding, there was a sign that read: "Idaho is Full of Beautiful Lonely Women".

Farris Lind was responsible for improving a child's ability to read along Old Hwy 30. I say this in jest, but if it weren't for his humorous signs, there would have only been a few miles of sagebrush and rocks to look at.

Farris Lind was the original owner of the Stinker Stations in Idaho. In my research via Google, I found an article written by Steven Crump for the Twin paper. It was titled: "Remembering the Bard of Kimberly Road" Apparently, 2011 is the 75th Anniversary for the celebration of cheap gasoline in Twin Falls.

According to Crump, Lind sold gas for less than 12 cents a gallon which was the going rate at the time during the Great Depression.

He started his business at the ripe old age of 20. If you grew up in Idaho; seeing the Stinker Station signs with their Fearless Farris Skunks and boxing gloves were a familiar sight. TV commercials later led to the theme song: "Fearless Farris is a Stinker!"

I can't begin to describe to you, the look on my husband David's face the first time I sang that slogan to him with my nose plugged. Another Idaho-ism!

Here is a sampling of The Stinker Station signs:

Californians Must Be Dipped Before Entering Idaho

Tourists Do Not Laugh at the Natives

If Your Wife Wants to Drive, Don't Stand in Her Way,

Is Your Clutch Slipping? Let us Check Your Rear-End.

Other signs could be found in out the middle of nowhere:

No Swimming Allowed in this Area

Sheepherders Headed to Town Have The Right of Way

Sage Brush is Free, Stuff Some in Your Car.

Being nostalgic does not mean that you want to live in the past. I think it means that a person recognizes all the milestones of their lives and enjoys rethinking them from time to time.

Ironically, I think that being able to afford gas at less than 12 cents a gallon in 1936, was just as hard to come by as it is in 2011 at nearly $4.00 per gallon. The only difference is that back then, people walked most places, or rode a horse or a bicycle.

So, this Missouri transplant from is leaving you with one last sign slogan that applies to me:

If You Lived Here, You Would be Home By Now.

Comments
View 34 comments
Note: The nature of the Internet makes it impractical for our staff to review every comment. Please note that those who post comments on this website may do so using a screen name, which may or may not reflect a website user's actual name. Readers should be careful not to assign comments to real people who may have names similar to screen names. Refrain from obscenity in your comments, and to keep discussions civil, don't say anything in a way your grandmother would be ashamed to read.
Respond to this blog