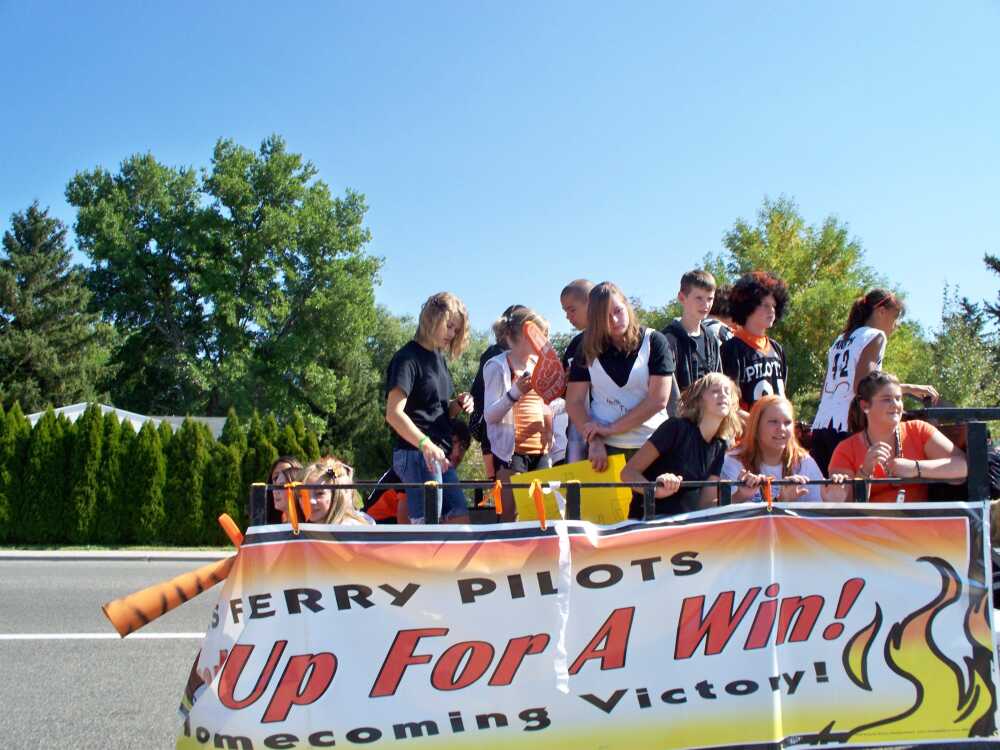 2009 Homecoming Parade. The Floats sure have changed!

In the 70's--Homecoming was a very different event than what the school kids experience today.

If you happened to be a freshman, this was not the happiest week of your life and the following week wasn't much better. The student council held a slave auction of the freshman class to raise money for scholarships. Each Freshman was given a "character" designation and expected to show up on Auction day dressed accordingly.

The week after Homecoming meant that your life was not your own. Depending the upperclassman that purchased you at the auction, you job duties were not just going to class. There were toilet paper races in the hallways, car washes, silly behavior such as barking like a dog or shining shoes.

The Auction always raised a fair amount of money and I believe that Mary Jane Bostic, who was in my sister's class, fetched over $100.00 in a bidding war between two Dannys. When the dust had cleared and and many pockets were emptied;, Poor Mary Jane found herself a slave to the Danny who was not her boyfriend.

The Freshman Class was always warned of the pitfalls of their station in life for the first few weeks of high school. Never accept a ride with someone older than you. You might find yourself walking back to school from Slaughter House Hill or some obscure gravel pit miles away from home or school.

It was not all miserable though. The School Spirit was energized by the Homecoming Queen Contest; the parade, pep rally and a bonfire.

And then there was the Snake Dance on Thursday Night before the game. The itinerary was as adventurous as you could possibly get for a teenager. With everyone holding hands in a death grip; you tramped through the bars, restaurants and back alleys. There was no slowing down as your group made their way through Hansens; Rocky's, The DeRail, The Starlite and The Trophy Club.

Ahhhh. It may not be as civilized and PC as it is now, but we had fun! There is still a parade every year, but we have lost our band. The football team is better than ever, but we have lost Coach Brown. The cheerleaders don't have the support of a Pep Club like we did or a drill team for half-time entertainment.

In 2009, Glenns Ferry celebrated its 100th birthday and an all-class reunion. I was able to go back for the festivities and I had wonderful time! Not only do you get to see all of your friends, but teachers too.

Alumni can't always be there for Homecomings, but we all have enjoyed being together whenever the opportunity presents itself. I remember how great Hull Memorial Park was at that time of year with all of the trees and and the leaves turning colors. I still remember the baked potatoes wrapped in tin foil, they kept your hands warm when the weather was cold and tasted wonderful!

School Pride is one of those character-building experiences when you are young. Living in a small community meant that you celebrated all of those events with most of your classmates for the entire 12 years of being a student. Those bonds may not have been as tight when you were going to school, but they have certainly become more precious as the years go by.

I am sorry that this blog is a little belated to the Homecoming Festivities, I didn't get my editing done as soon as I should have. Go Pilots!