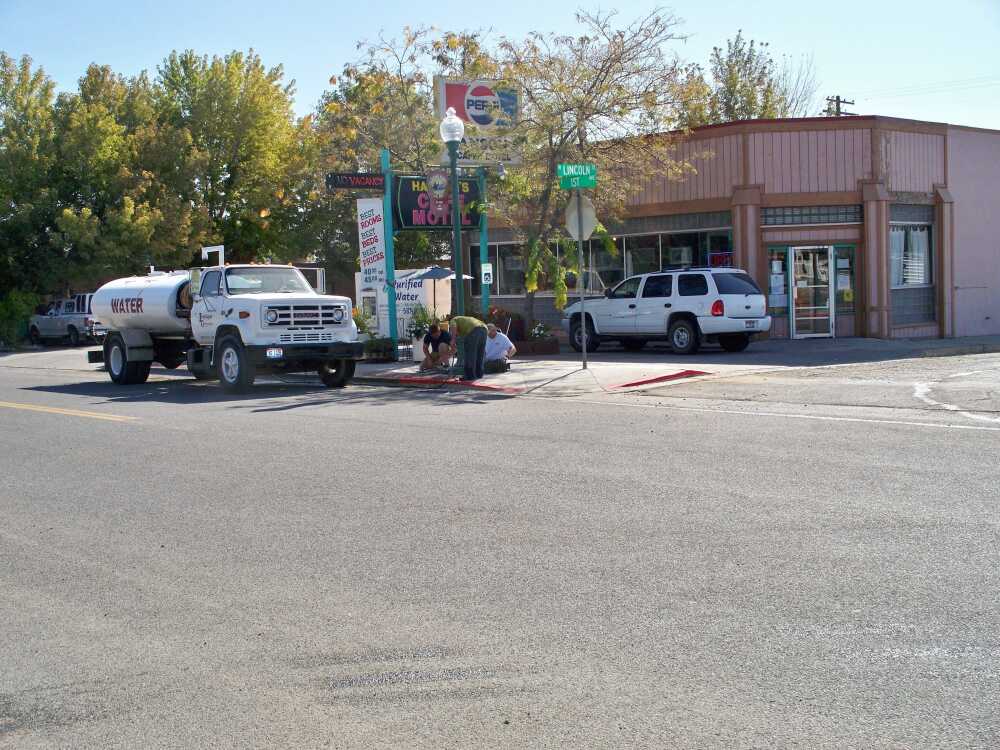 One of my first babysitting jobs was for a neighbor. They had a little girl who was about 5 or 6. I was pretty excited about it. She was an only child and had been a little delicate her first few years due to a heart problem.

They didn't have a TV set at their house, but there was one at the grandmother's trailer. So after a while, we trooped over to the trailer house to watch a little television before I had to put Christie to bed. I can't remember if we wanted a snack and decided to go back to the main house or get something for Christie. But we left the trailer house with the TV still going.

Imagine my surprise and shock when we came back and the door was locked! Unable to get in, we could hear the TV was blaring and all of the the lights were on in the kitchen and living room.

Little Christie was a very sober child for her age and she was worrying about remembering where the spare key was or if there was another door or window that we could crawl in. We took a tour of the trailer and tried the second door, locked.

So, we went back into the house and began looking for the spare key. Poor Christie kept saying, "I really should know where it is, but I just can't remember." I am thinking to myself, that this will be the last time that they ask me to babysit.

After about an hour, the spare key was still nowhere to be found and it was Christie's bedtime. So I had to wait until her parents came to home to tell them that we got locked out of trailer house.

My worries were relieved when they came home and responded with gracious humor about my "mistake". Jim produced the spare key and we were able to get everything turned off.

I was asked to babysit Christie several more times after that. We decided that it was best not to go to the trailer, but to stay and read books instead.

I worked as a waitress in Hansen's Cafe in Glenns Ferry for about 3 months in the late 70's. I was a surprisingly good waitress for someone who couldn't tell her left from her right or carry 4 cups of coffee in one hand. What I lacked in coordination, I made up in speed. I tried to never let a customer think that I was ignoring them, no matter how busy I was.

A bustling place, Hansens probably employed most of the younger crowd of teenagers and ladies of a certain age in the 60's and 70's.

Greyhound and Trailways buses stopped there for short breaks and s dinner break.The morning and afternoon coffee groups; the dinner crowd and the bar-closing crowd.

Whatever shift that you worked, you were very busy! They made milkshakes, the old-fashioned way and coffee was a quarter with unlimited refills.

Being the naive person that I was, it was a real eye-opener about human nature. Men flirted with you, whether they were married or not. I spent a great deal of time running back to the coolers to cool my red face! The bar crowd was lively, but easy-going. You could count on a marriage proposal or two every evening.

We had a few grumpy and angry customers too. One old gentleman would always came in and ordered burned toast. I mean really burned. He would eat and then pay for his meal. As he was leaving, he would become more agitated as he described the conspiracies of the world, including his theory on who assassinated JFK. Jay would calmly take his money while providing a few well-placed "is that right?" comments and smoking his big cigar.

Marriages started and ended there, people got off of the bus from jails and mental institutions to stay a while. Some of those poor people never left their chairs until someone came to get them from the hospitals. It was also a hotbed of gossip and scrutiny.

Helen Devaney was a seasoned waitress and a familiar face at Hansens. She had babysat most of the kids in Glenns Ferry for over 20 years and when her own children were nearly grown, she found herself raising a little boy whose mother had left him. Helen worked hard and hummed a lot. She was probably in her sixties when I worked with her, but she could out-walk anyone.

The wages were low and the tips were not comparable to a fancy establishment in a bigger town. On the other hand, you met interesting people and learned some very valuable lessons about human nature.

This blog might not be as entertaining as the last one. But sometimes a little trip down memory lane is just as nice.